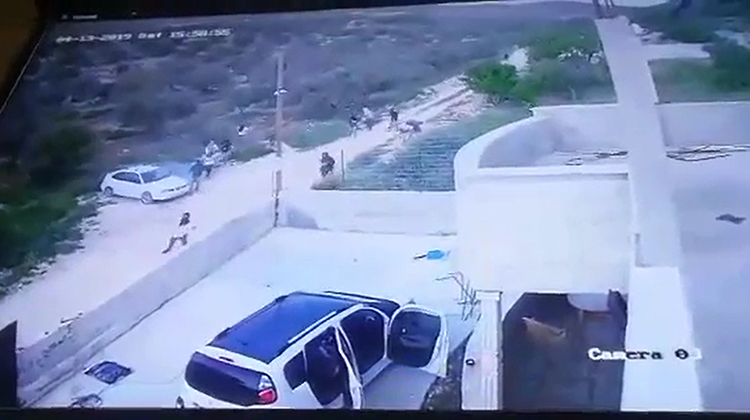 I live with my husband and three children – my four and a half year old son, and my daughters who are two years old and three months old – in the northeastern neighborhood in the village. I’m a teacher at the girls’ school in the village Yatma. I teach science and history up until the matriculation exam level.

My husband inherited the land we built our house on from his parents. We moved here two years ago. It was peaceful during the first year. Last year there were two incidents. In July 2018, settlers came down from Yitzhar all the way to our house and burned my husband’s vehicles. In September 2018, settlers came to our house, smashed his car windows and sprayed “price tag” on the wall surrounding our house. Our neighbor also suffered from settler violence.

After lunch we planned to go visit my uncle’s wife in Urif, where there was a party. The party started at 3:30 but I was late leaving the house. We left at around 4 pm. I got into our car, which was parked in the yard, holding the baby close to my body. My two other children were already in the backseat. My husband went to bring the car keys.

Suddenly I heard someone yell “settlers”, and at that instant a rock landed on the car. I saw settlers coming on the dirt road and throwing rocks at the car. They were throwing large rocks. I didn’t know what to do. I tried to get out of the car. I bent over to protect the baby from getting hurt and started screaming. The entire episode lasted for a few minutes. I was mostly worried about my children who sitting in the backseat.

After this incident my children and I didn’t sleep in our house for an entire week. Only my husband slept at home. My son wakes up at night scared and he started wetting the bed again.

I live with my family in the north-east part of the village, about 200 meters from the center. The house is on the outskirts of the village but it isn’t the last house, there is a house farther to the east. We moved here a year and ten months ago.

I am an elementary school teacher at the village Awarta. In the afternoon I drive people in my car for an additional income. After the violent incidents I experienced with settlers about a year ago, I’ve stopped driving people late at night. My wife is also a teacher. We have a four year old son and two daughters, one is two and the baby is three months old.

During our first year here it was quiet, and after that the problems started with the settlers from Yitzhar on the hill across from us. In July 2018 they torched two cars in our yard. In August 2018, I bought a small used car for parts, and they damaged it in our driveway. They damaged it and slashed the tires, just like our neighbor’s car. In retrospect I understood that the settlers did this to take revenge after the army evacuated one of their illegal mobile homes. In both cases I didn’t receive any assistance from anyone and I was forced to build a fence around my house by myself and at my own expense.

On Saturday, April 13, 2019, I was home with my family and two friends came over to help assemble protective screens on top of the concrete fence surrounding the house. Our friends came separately by car. One parked inside the yard beside my car, and the other parked his car outside.

At around 4 pm my wife put our kids in our car, and I went into the house to bring the keys. Then, one of our friends spotted a group of young men coming at us on a path from the east. They wore kaffiyehs. They started throwing lots of heavy rocks they carried in their clothes. My wife was with the baby in the front seat and the kids were in the backseat.

I shut the side door to the kitchen so they wouldn’t come inside, and ran quickly to get my wife and baby out of the car because they were completely exposed. I managed to rescue them from the car while the rocks rained down on us. I got them into the house.

When the settlers were about four meters away from the car, I ran to rescue the two children, whose lives were truly at risk. My son opened the door and my daughter had her head by the window and they could have gotten hit in the head at any moment. I managed to get them out unharmed, but I was hit in my shoulder by a rock.

After a few young men from the village arrived, the settlers started walking up the hill towards Yitzhar, not the path they came down on, and at the top of the hill there were a few armed settlers who shouted for them to come up.

I have videos of the entire incident that I downloaded from the security cameras. I went to the DCO in Huwarah and filed a complaint. I gave them a copy of the footage. After the incidents last year, police officers came to examine the house, but this time nobody came.

I’m certain the settlers came to harm us physically because they knew when we were outside, and it’s a miracle we made it. Since then, my wife and children have been sleeping over at her parents’ house in the village. My son is constantly afraid and keeps asking why they do this to us. He also remembers the car being torched in 2018. He wets the bed at night and asks us to take him to the bathroom during the day. I sleep at home alone on the sofa, keeping an eye on the monitor connected to the security cameras. I’m willing to sell the house at a loss just to leave this neighborhood.

On May 29, 2019, the police closed the investigation file due to “offender unknown”.
Silence is Golden