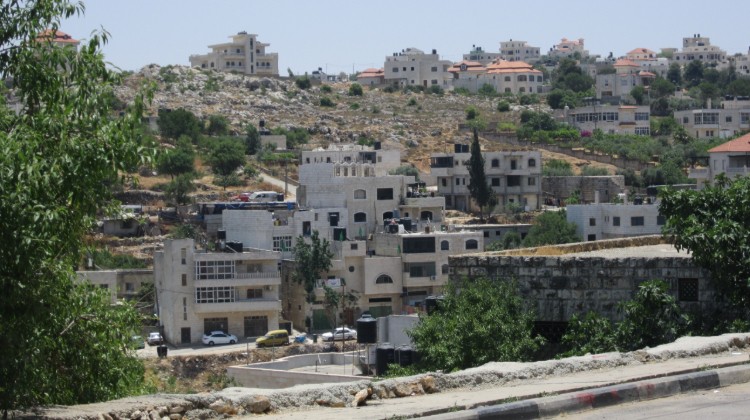 I live in Silwad, I’m a lawyer, I used to serve as the chair of the Palestinian military court. I own land east of Silwad in an area called Khallat a-Sultan. It is 0.5 km away from the last house in the village and 0.5 km from the nearby village Deir Jarir. The land was defined Area C. I inherited the land from my father. My family owns 15 dunams, of which I own 4.5 dunams, where I grow fig trees, almond trees, grapevines and apricot trees.

I didn’t used to suffer from harassment and violence from settlers. Until two months ago, when settlers built an outpost [Netzach Binyamin] on Silwad’s land. They set up a single shack there and took over an ancient structure that belongs to the village. They are there regularly. They hurt herders, drive people away and scare people. Sometimes there’s an ATV they drive around.

On Thursday April 11, 2013 at around 4 pm I rode my horse over to my land and got within about half an hour. When I arrived, my friend RA from Deir Jarir, who is a herder warned me about settlers in the area throwing stones. I immediately called up Silwad’s council head, who gave me Yesh Din’s number. I spoke to him and described what was happening. He said he would call the army.

In the meantime, HA, RA’s brother who was with him on his farmland came and drove me by car to where RA was. I called Yesh Din’s representative again and he said he was in contact with the army. Suddenly I heard shouting in Hebrew and saw soldiers in a military jeep stop by the shack in the outpost. The settlers ran away in the direction of the valley. HA and I walked over to the soldiers, there were three of them and an officer.

I told them what had happened. I said that there is trouble now every day since the outpost was built. I asked the officer whether it was legal. The officer replied that it wasn’t legal, but he didn’t have authority, it’s the police’s authority. I signaled to where the settlers had run off to. The jeep left. I went back to the plot.

Suddenly, without seeing where they had come from, I saw three masked settlers, two of them had metal rods and rocks, and another one who was farther away. The two settlers who were closer to me were dressed in regular clothes, one was about 20 and the other was about 30. They said, go home. I said, “This is my home, you go home.” They started to throw rocks at me, and I managed to protect myself with my hand.

And then, the settler who was farther away ran towards me and threw a large rock that hit my left leg. I tried to take a photo of it with my cellphone, but I couldn’t. Then they attacked me again, knocked me down, kicked and beat me with metal rods and rocks. I shouted because I wanted the herders who were in the area to hear me. The settlers left me alone. I guess they saw someone come near. My head was bleeding hard and I was taken to hospital in Ramallah by ambulance and had surgery to my head. I have two fractures in my skull.

In addition, my phone and ILS 500 disappeared from my pocket.

On July 6, 2013 the police closed the investigation file due to “offender unknown”.
Silence is Golden