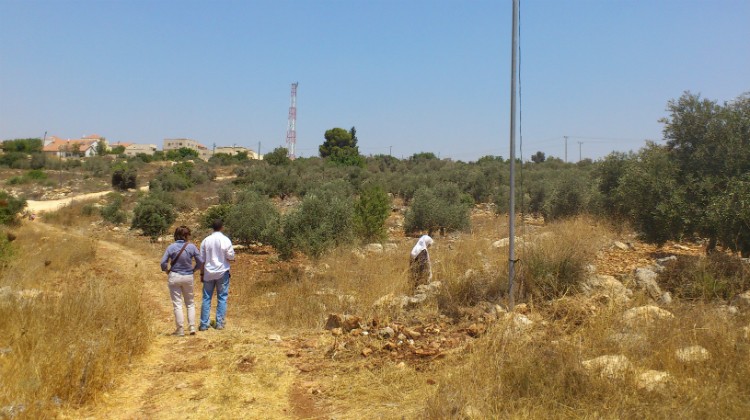 On Thursday, August 21, 2008 at about 8:30-9 am, I rode my donkey to my land. When I got there, I saw that my terrace had been destroyed and my fence broken. There’s a contractor who has excavators [vehicles] working there, I don’t know who he works for. I went up to the watchman who was guarding the vehicles to ask for G’s number, who is in charge of security in Revava. The watchman was a young man with a beard and a kippah, dark hair, about 35.

I asked the watchman in Hebrew for G’s phone number. The watchman starting beating me up and hitting me in the stomach, he also hit me with his rifle, he had an Uzi. I asked him why he was hitting me, and he got closer and tripped me. I fell on a pipe and hurt my back. When I fell, the watchman ran towards the settlement Revava. Then another man arrived in a white Toyota four-wheel drive, he apparently was the guard in Revava or someone from the settlement security. He told me to get up and come to the vehicle, I told him I couldn’t get up. He told me to get up and come, that we’d talk quietly and not make a fuss.

I continued to lie there in the sun for about half an hour and then four-five soldiers arrived and then two policemen. I had called over the police in Ariel on my cellphone. My brother also arrived (my brother and his young children arrived within about an hour, they only allowed my brother to come to me), and he called an ambulance in Nablus. When the ambulance arrived, it wasn’t allowed to enter Revava in order to get to me. We had to wait for three hours until the army’s ambulance arrived. Someone in Revava’s security didn’t let the ambulance into the settlement because he didn’t get approval from G, who’s responsible for security in Revava.

The police and army were there throughout the three hours we waited for the ambulance. They didn’t take my testimony, I couldn’t talk because of back pain. My brother gave the police my ID card and I didn’t get it back. My brother doesn’t know who he gave it to or the officer’s name. When the military ambulance arrived, they drove me to the settlement gate and transferred me to a Palestinian ambulance. The ambulance took me to the hospital in Salfit. The doctors said my back was injured. Even though there wasn’t a fracture. Since then, my feet are swollen and I have headaches. I was in the hospital for about eight hours, and they sent me for x-rays in a hospital in Nablus. Since the incident, I’ve been treated by two doctors in Nablus.

On March 4, 2009 the police closed the investigation file due to “lack of evidence”.
Silence is Golden