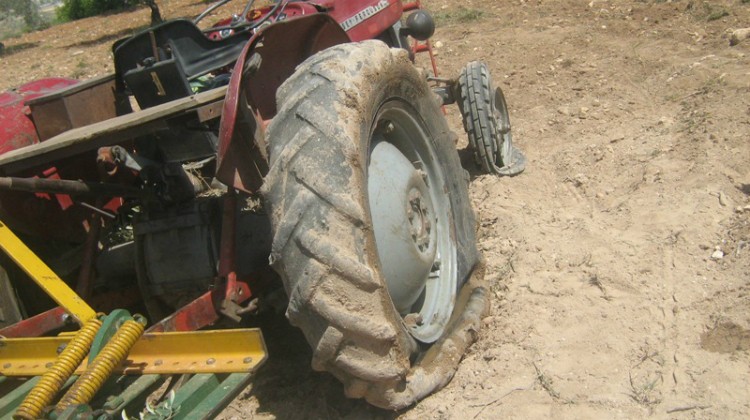 I live in Qaryut. I’m a farmer and I own farmland about two km west of the village. The settlement Eli was built half a kilometer from my land. Recently, the settlers have taken over all the hilltops in the area and the settlement Eli is expanding and moving closer to my land. I own four dunams, with ancient olive trees that are hundreds of years old.

I’m allowed to access my land only after coordinating with the army. Usually they give us a permit to go to our land just twice a year, once during the olive harvest and once to plow – only for a day and a half. Usually coordination fails, because after the settlers come, the army arrives and makes us leave, that’s how it’s been since 2001.

Every year during plowing season and during harvest season we suffer from the settlers. Not only are we prevented from going to farm our land all year round properly, but even with the day and a half every year we get a permit to go to our land, the settlers come and ruin everything and attack us. The army always backs the settlers and instead of making the invaders leave, they make us leave. Lots of trees belonging to my neighbors and me have been cut down. During the olive harvest, there is a lot of olive theft, and olives are our most important source of income. When we finally receive a permit to go harvest, we get to our land only to discover the olives have been harvested and stolen.

On Tuesday May 3, 2011 after the village council managed to receive a permit from the civil administration to plow farmland, I went with about twenty other farmers to our land. I have a tractor and I plow for others from my village. We left at 7:30 and arrived at 8:15. At 8:30 I began plowing my cousin’s plot. The other farmers worked on plots closer to our village, and I plowed land close to the settlement Eli.

At around nine, a settler walked over to us. We know him, he’s called K. He’s tall, full, black hair with a beard and no kippah. I know he’s been to prison. He was armed with a knife – its blade was about 35 cm long. It was attached to his pants at the hip but I could see it.

He spoke to me in Hebrew and I can understand a little Hebrew. He said, “You have half an hour to get out of here.” I said, ‘This is my land, get out of here.” He gestured to his neck with his hand, meaning he would slaughter me and repeated it a few times.

Usually when we coordinate with the army, soldiers are supposed to be present. When I arrived, there were no soldiers but while speaking to this settler, a jeep arrived with a soldier and an officer from the Israeli DCO. The officer spoke to the settler K and made him move away. I continued to work with the tractor and they took the settler away and left.

At the same time, a second tractor came to help me. I shouted at the settler to leave because we wanted to work, and he threatened to burn the tractor. The second driver was afraid and returned to the village, but I stayed.

The settler and the border policemen left and moved away and I stayed there alone. I finished plowing that plot and drove over to my land, which is closer to the settlement. I saw the border policemen and asked them to escort me because I was afraid, but they said there was no need because he won’t come.

I drove the tractor, there was an old woman also walking in the same direction. I started plowing and suddenly I heard the woman shouting. The tractor was noisy so I couldn’t hear exactly what she was shouting to me. Later, she told me that she saw the settler K coming over to me with a knife in hand.

I was sitting on the tractor, so I was high up and he tried to stab me in the back, but he only managed to tear my coat, under my shoulder. I looked back and saw he was holding the knife and damaging the tractor tire, the back right tire, the large one. Then he turned around and came over to me and I pushed him away with my leg. I was only thinking of how to defend myself, so I tried to turn the tractor around. Once I pushed him back with my leg, he stabbed the small front tractor tire and then the small left tractor tire, he ran around the tractor and stabbed the large left tire. There was no way for me to defend myself.

I shouted loudly for the border policemen to come. I got off the tractor because I couldn’t drive it and lifted a few rocks to frighten the settler away. I didn’t throw any because I was scared that he would complain against me. The settler saw the rest of the farmers coming and ran away.

I couldn’t keep on working because he had damaged the tractor, and then the second tractor came and towed it. I have photos of the damaged tractor. I had to repair my tractor and paid ILS 8,000. I also have a photo of the settler. There are a lot of complaints against him at the police.

Finally, the army arrived because we had called and asked the head of our council to call the DCO and alert the army. An hour and a half later, the police arrived and took my testimony. They said there was no need to come to the police station to file a complaint, but they didn’t give me any notice.

In October 2013, an indictment was served against the settler KH for threats, possession of a knife for a forbidden reason, intentional damage to a vehicle and attempts to injure a person while the perpetrator was armed.
In December 2017, as part of a plea bargain with the defendant, the indictment was stricken for the above offenses and KH admitted to and was convicted of disobeying a legal order, interfering with an officer’s duty and holding weapons, offenses attributed to him in two other indictments served against him.
The Jerusalem Magistrate Court sentenced KH to a suspended prison sentence and a fine of ILS 1,000.