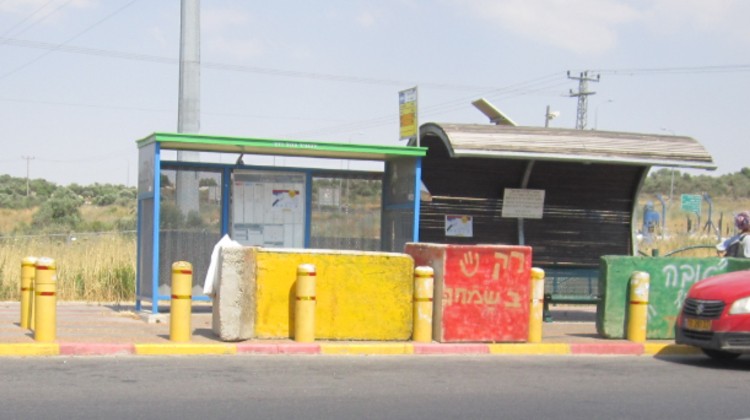 I live in ‘Izbat a-Tabib and work as a senior secretary in the Palestinian Authority’s ministry of welfare. For a long time, I worked at the ministry’s branch in Qalqiliyah and several months ago, for organizational reasons I was transferred to the ministry’s offices in Salfit, which lengthens and complicates my daily commute to work. I leave my village through Jinsafut, pass through Tapuah checkpoint, and there at the bus stop at Tapuah Junction on the road to Salfit, I wait for a taxi to take me to work, every day.

A month before the incident, I sat at the bus stop at the junction and several settler women arrived. One of them verbally assaulted me, she started cursing me and shouted at me in Hebrew and Arabic, she said, “Get out of here, you donkey”, and other curses. She made me back a few meters away.

About two weeks before the incident that same settler woman came and repeated the ritual.

On March 27, 2008 at 9 am, on my way to work I was sitting by myself at the bus stop, waiting for the taxi to come and take me to work. I was sitting on a bench in the stop, legs crossed. Three settler women came up to me, one of them was the woman who verbally assaulted me the two other times. The three settler women stood facing me, the attacker stood in the middle between the other two. I stayed seated and though that this time it would end like it did before.

The settler women didn’t speak. The middle one had a bag in her hand, she took a black wooden club about half a meter long (like a police baton) out of her bag and hit me very hard on my right knee. Immediately after, a private white vehicle arrived, picked up the three and drove them in the direction of the settlement of Tapuah. She hit me very hard and I couldn’t go to work, I stopped a taxi and rode to the hospital in Qalqiliyah, where I was treated. Then I went home. I got home at 2 pm. I had strong pain for three days and I could barely move. I had to take ten days off from work because of it.

I can identify the settler woman for certain. Description of the attacker: just over 1.70 meters, medium build, around 30 years-old, light skin, blonde hair worn in a braid. All three times she wore a long skirt that reached her shoes, no head covering.

On June 16, 2008, the police informed Yesh Din that the investigation file was closed due to “offender unknown”.
Silence is Golden