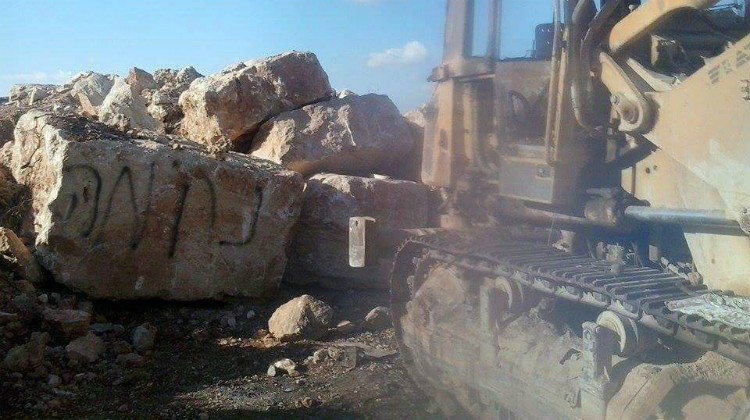 On the night of August 31, 2015, I was asleep with eight other workers in the shelter we have by the quarry. At around 1 am I woke up from the smell of smoke and the sound of an explosion. I left the shelter and saw smoke coming from the bulldozer that was parked 30 meters away from us. We all went outside and began pouring water over the bulldozer. It was dark and we didn’t see anyone. After we put out the fire, we saw the word “revenge” painted in large letters on the rock by the bulldozer, as well as a Star of David. We realized that settlers had done this. We immediately called the Palestinian police in Bir Zeit.

The following day at noon the Palestinian police arrived, they looked around and photographed and called the Palestinian DCO, and they transferred it to the Israeli DCO. At around 6 pm, an Israeli DCO officer arrived with the army. They took photos of the damage and took my testimony. On Wednesday the Israeli police came with a forensics team and took fingerprints and photos.

The entire inside of the bulldozer was burned, as well as the steering wheel and the seat. My brother owns the bulldozer.

The Israeli police summoned my brother and I to file a complaint at the Binyamin Police. We went there on September 6, 2015. At the Binyamin Police we were treated like suspects rather than complainants. There was an investigator who threatened to put me in jail if he caught me lying and I’d have to pay a large fine. It was very humiliating. The second investigator also spoke to me like I was  a criminal. This was my first time coming to this police station and they started cursing me and my cousin who accompanied us to the police. One of the investigators called my cousin a “drug addict” and insulted him. I asked them why should I torch my bulldozer, it’s my source of income. The damage to the bulldozer is about ILS 60,000.

I won’t complain about the officers because I see that nothing will help them, and they’ll only take revenge on me and won’t give me a permit to work at the quarry, or any other permit. Tomorrow other workers were asked to go and testify at the police in Ma’ale Adumim and I’m asking Yesh Din to send someone to accompany them to the police, so they won’t also be humiliated like we were.

On November 7, 2016 the police informed Yesh Din it had closed the investigation file due to “offender unknown”.
Silence is Golden