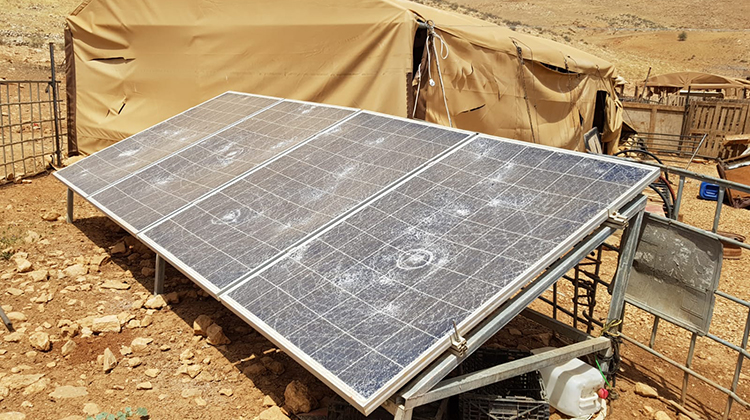 I live in an encampment in the Jordan Valley all year round. Every few days I go home to my wife and two young children – one is a year and a half years old and the other is five months old – in the village Aqraba. I have a flock of 50 sheep and 30 goats. I also herd my father’s flock, which has 200 animals.

I take the herd to pasture every day. At 5 am we milk and then leave for pasture at around 6 am. At 10:30 we return to the encampment to water the flock and rest until 3:30 pm. We take the herds back to pasture until it gets dark. My father comes every morning to bring us food and supplies and to take the milk to Aqraba.

On June 15, 2020, I was in pasture. I left at 6 am, my brother and his herd were with me, as well as my cousin. At about 10:30 I noticed four vehicles driving towards our encampment. The vehicles had Israeli license plates. I called my father right away to ask whether he was expecting any visitors. He told me, “I’m not expecting anyone”. I hung up the call with my father, got closer to the encampment and from 600-700 meters away I saw four vehicles and I also took pictures of two of them.

I called my father again and said: “Come quickly and bring help.” I could see the settlers park their cars, get out and walk over to the encampment. They started tearing the tents and then went to my father’s tent where the electrical system is. The [solar] panels are outside, and the batteries and timer are inside the tent.

I could see them going in and out and putting things in their cars. They walked back and forth with things for about a quarter of an hour. After that, the settlers got into their cars and drove towards Highway 60. They drove north and passed us. I saw them wearing black masks inside the cars. I don’t know whether they wore masks because of COVID. When they reached Allon Road they continued for another kilometer and then turned left and took a dirt road that leads to the settlement Itamar.

The following day, two army vehicles and a police vehicle arrived, as well as another vehicle with a red license plate. One of them told me: “I’m the GIS officer who called you yesterday.” They took pictures and documented. The police officer and the GIS officer took my testimony. The police took a four-page long testimony and then I signed each page. I didn’t receive a receipt for filing a complaint.

A.B, 52, married and the father of eight, Aqraba

I live in Aqraba and during the winter I live in the encampment with my children and my family, where we herd our flock. I have six sons and two daughters: the eldest is 30 and the youngest is 12. Three of my sons are shepherds and they stay in the [Jordan] Valley all year round, they herd their flock as well as mine, which has 150 sheep and 50 goats.

When I live in Aqraba, I drive down to the Jordan Valley every morning to bring my children food and any supplies they need. When I return to Aqraba in the morning I take the sheep’s milk to make cheese we then sell in Aqraba and the neighboring villages. This is our traditional way of life dating back to my grandfather’s days.

We buy water by the tank and a tractor pulls it to us. We have solar panels that were supplied to us by an organization and by the municipality of Aqraba for electricity. Each of us, my three sons and I have separate encampments that are by each other. We also have a structure like a sheep pen surrounded by an iron fence so the sheep won’t escape.

On June 15, 2020, I was in Aqraba. At about 10:30 am I got a phone call from my son who asked me: “Father, are you expecting visitors at the encampment?” I told him, “I’m not expecting people or anybody”. My son told me: “I saw four vehicles with Israeli license plates driving towards the encampment. If you aren’t expecting anyone, then these are settlers”. Then my son hung up.

I called my brother and another relative right away and we took my car to the encampment. I immediately notified the head of council and asked him to inform the DCO that there were settlers in our encampment. When I reached my son at 11 am, there weren’t any settlers or cars in the area. I saw a great deal of damage in our encampment: eight tents torn; the batteries for the solar panels stolen – each battery costs 1,000 shekels; they smashed the solar panel glass – four solar panels cost 7,000 shekels. They were completely shattered; they stole all sorts of things from the tents, such as five blankets and rugs and two new tarps that were still in the bag; they broke kitchen equipment, tea glasses and the coffee maker.

I took photos of everything right away and called the council head back to report what had happened and the damage that had been done. I returned to Aqraba at about 2 pm. But before that, I asked my sons to leave and move farther east, about a kilometer deeper into the Jordan Valley for fear of the settlers.

On November 8, 2020, the police informed Yesh Din it had closed the investigation file due to “offender unknown”.
Silence is Golden