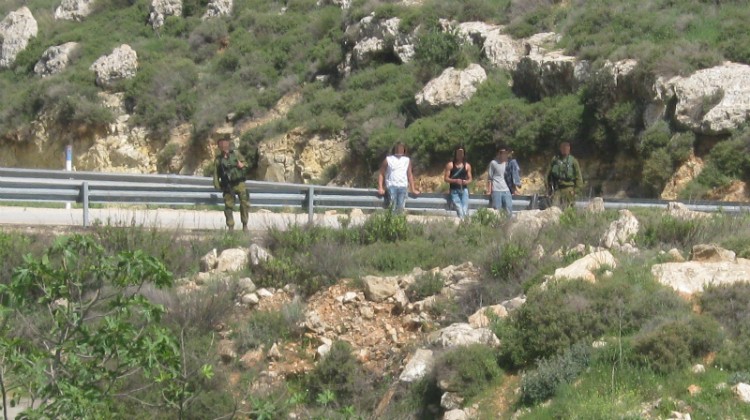 I am the head of Deir al-Hatab’s council. The village is five km east of Nablus, it has about 2,400 residents. The settlement Elon Moreh is 800 meters north-east of the village.

This severely harms families who make their living farming. We are a farming community and we used to only farm. But because of problems accessing our land and because we barely have any land left, we’ve changed our way of life.

The problems started when the second intifada began, and they’ve gotten much worse. Since 2001, the settlers don’t miss an opportunity to hurt us. They attack us on our land, drive us away, throw rocks and even use their weapons to intimidate us. A lot of farmers have stopped going to their land around the settlement because they are afraid. It’s very dangerous. There have been many cases in which farmers tried going to their land and were attacked and even hurt or killed. There is a lot of damage to our land because we cannot tend them properly all year round.

It’s hard to describe just how much we suffer from the settlers’ actions. But the more severe problem is that the soldiers, in most of the attacks help the settlers attack us, they see them attacking us, or cutting down our trees, or burning our property, and they don’t intervene. That happens often.

I myself own forty dunams of land, I have olive trees on my land, and my family owns another three hundred dunams. Before 2001, we had over 5,000 olive trees. Now I can’t tell how many are left because I can’t go to my land and check, because my land is inside the settlement. I’ve tried many times, but I haven’t succeeded. I tried coordinating with the army, but I didn’t get a permit. The settlers have burned hundreds of olive trees during the past few years, mine and those belonging to other farmers from my village. We can’t access our land but we are able to see smoke coming from our land occasionally, and the Palestinian DCO informs us. There were also hundreds of trees cut down or uprooted. The settlers in Elon Moreh are very violent.

On March 17, 2010, we managed to coordinate with the DCO and with the army to reach our land near the settlement Elon Moreh. Nine farmers and I went to our land. We got there at 8 am and began working. We intended to plow our land, because it’s plowing season.

An officer from the DCO and a female soldier were there, no other forces. At around 10:30 am, four female settlers came to our land. They went up to the DCO officer and talked to him. I understood they were objecting to us farming our land and they were asking the officer to drive us away. A few minutes later, two more settlers arrived and started talking with the officer and the soldier and then began cursing us and threatening us, demanding we leave our land. We continued working.

A few minutes later, another settler arrived, he seemed ultra-orthodox, he was dressed like someone ultra-orthodox. He looked like he was thirty, with a beard, red hair, tall, fat, he came right over to us and started cursing and threatening, and then pushed me to the ground. He said if we didn’t leave, things would get complicated and wouldn’t end well. The officer tried to calm the settler, but that didn’t help. After the settler became more abusive, the officer threatened to call the police if he didn’t stop, and that settler left and walked towards the settlement.

Five minutes later, two young settlers arrived. They cursed us, threatened us and threw rocks at us. Ten minutes later, an army jeep arrived with three soldiers while the settlers were throwing rocks at us. I was wounded in the leg from a rock, and some of the other farmers were also injured by the rocks.

The soldiers tried moving the settlers back but that didn’t work, and after about an hour, a police car arrived. The police officers talked to the officer who was there and took his testimony. As a result, the policemen arrested one of the settlers and took him to the police station. The policemen asked me to go to the station and file a complaint. That same day, at around 2 pm I went to the Ariel Police and filed a complaint. I saw the settler who was arrested, he was one of the most violent of the group that attacked us.

Unfortunately, we didn’t manage to continue our plowing even though we waited for such a long time to successfully coordinate it [with the army] because the settlers attacked us with rocks and it was a big mess. When the army and the police arrived, the DCO informed us we’d have to finish working because the situation was escalating.

I live in Deir al-Hatab, I’m a farmer by trade. Most of the village’s land is on the north-eastern part of the village, where the settlement Elon Moreh is now.  My family and I own 600 dunams in that area, with olive trees on our land. The area is called Khalat Isma’il. We suffer badly from the settlers’ ongoing harassment for many years. The settlers burned hundreds of dunams, uprooted hundreds of trees and took over a lot of land in this area, all with the army’s backing.

In 1997, settlers burned 300 dunams, and in 2007 settlers burned over 70 dunams of our land. My family and I can’t reach most of our land at all, so it’s hard to know what condition it’s in. We are allowed to reach some of our land only if we coordinate with the army and the DCO, and that is very hard to do, and even when we manage to coordinate, it’s for a very short time. The army doesn’t allow us to go to our land without coordination and they drive us away using force, settlers attack us on our land every time we go there, even if we coordinated it.

This has caused a lot of damage to our farmland and our trees, which can’t be tended properly, and is also a big financial problem for many of the village residents, who make a living farming.

I have almost fifty dunams of land inside the fence of the settlement Elon Moreh, and I haven’t been able to my land there in years. There is a lot of land surrounding the settlement that we can’t reach, because it’s very dangerous. There have been cases in which settlers shot at farmers who tried to reach their land. People didn’t file complaints because they didn’t think it would help. The army stands by without doing anything, and there were even cases when the army participated in the attacks. During the last harvest season, although we coordinated with the army, settlers came and attacked us, prevented us from harvesting, and the soldiers joined in: they threw rocks at us with the settlers as well as beating us and drove us off our land.

On March 17, 2010, we managed to reach our land after a long period of trying to coordinate it with the DCO. I went with the head of council and seven other farmers in order to plow our land, even though one day is not nearly enough time.

We got to our land at approximately 8 am and started working. An Israeli DCO officer was there, along with a female soldier. I have a plot that is very close to the bypass road that leads to the settlement Elon Moreh. I went over there to begin plowing. The officer came over and asked me to leave that plot, which is about six dunams because he claimed I hadn’t coordinated working on it. He asked me to plow a different plot. So I went to a different plot by the spring.

At around 10:30 am I saw four female settlers coming towards us. They started shouting at us to leave. They went over to the officer and talked to him, asking him to make us leave. I continued to work. About ten minutes later, a settler arrived, he seemed to be ultra-orthodox, and he started cursing and threatening us. He demanded we leave our land immediately, saying that otherwise it would end badly for us. The officer tried to move him away but didn’t manage to. The settler pushed me and tried to make me fall down. The officer intervened and threatened to call the police if he didn’t stop, and the settler left and went back towards the settlement.

A few minutes passed and then three more settlers arrived and immediately began throwing rocks, threatening us, they cursed us using very abusive language. They cursed us in Arabic and in Hebrew, and were very violent, both verbally and physically. My hand was injured by one of their rocks. Apparently the officer called for backup, and a few minutes later a jeep arrived with three soldiers. The settlers continued to throw rocks. We, all the farmers who were there, tried to run away butt they ran after us.

We got away but stayed in the area and after about an hour, a police car arrived. They took testimonies from the soldiers and the officer, as well as from us. They arrested one of the settlers and took him with them and asked us to file complaints at the Ariel Police. The next day, I went and filed a complaint at the Ariel Police, the investigator showed me photos of settlers and I identified one of the attackers.

The “Shomron” Police prosecution department served an indictment against a minor for assault in severe circumstances. The trial was held in the magistrates court for juveniles behind closed doors.
Silence is Golden