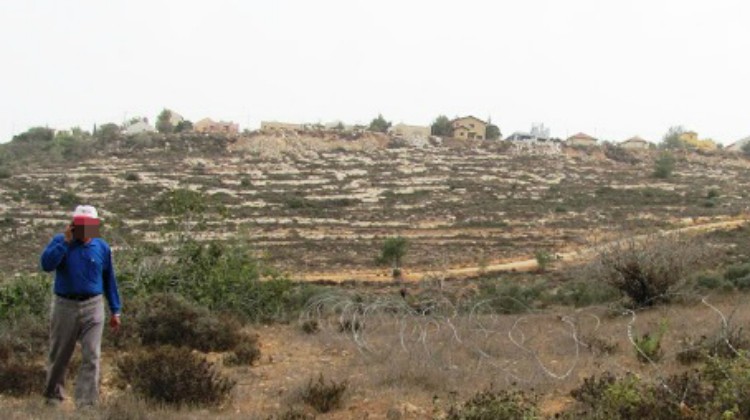 There are thirty Roman olive trees on the plot, hundreds of years old. Until 2000, when the intifada began, I was able to go to my land without any problems. Since 2000 there have been problems, the settlers come and drive us away from farmland. Landowners from the village who own land by the settlement “special security zone” have given up and have stopped going to their plots, I’m the only one who continues to go regularly and harvest my olives.

Six years ago, M the settlement civilian security coordinator [CSC] entered the picture. He gave us his phone number and demanded that we tell him and coordinate before we go to the plot. We followed his demands and there wasn’t any trouble. Two years ago, a new CSC named D arrived, and we continued to follow the same system and there wasn’t any trouble. Then a year ago, D was replaced by T. Last year there was little fruit on the trees, and we harvested with no trouble.

Yesterday, Saturday night October 20, 2012, we called up T the CSC to coordinate before coming to harvest. T approved it was okay and us coming.

Today, Sunday October 21 I walked over with my wife and two sisters, and we got to the plot at 7 am. There were over fifty meters for rolled barbed wire set up to the length of the entrance to the plot, apparently in order to put up a fence and prevent us from entering the plot. We managed to squeeze by and walk around the barrier and began harvesting the olives.

At around 7:30 am, T the CSC arrived and said: “You have five minutes to leave, there are settlers here who want to attack you, if you don’t leave I’m not responsible for you being attacked by them”. He spoke Hebrew, my wife understands Hebrew. We didn’t see any settlers around. I asked the CSC who had put the barbed wire there, but he didn’t answer, he only said we had to stop bothering the settlers.

I expect and want to be assisted in removing the rolls of barbed wire and being able to go and harvest on our land. The trees on this plot give about 15 sacks of olives, 240 liters of oil, which are worth ILS 8,000.

On September 25, 2013 the police closed the investigation file due to “lack of criminal culpability”.
Silence is Golden