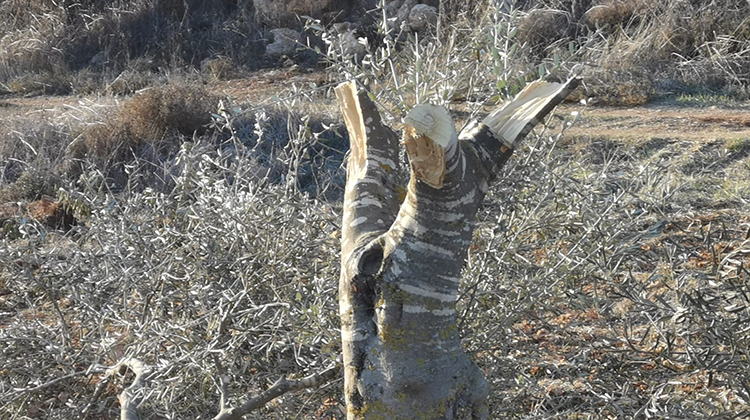 Abdallah Na’san, married and the father of six, Al-Mughayir

I own land and olive groves both by Allon Road and the outpost Adei Ad. Yesh Din has a lot of cases and a long history of altercations and violence, olive trees cut down and land stolen from my family.

All through the years we’ve suffered from settler violence and filed countless police complaints, but all the cases were closed. I think I should file a complaint against the state for the immense financial damage I was caused and for suffering. The state didn’t provide security although the entire area is under Israeli control. It’s unthinkable that an area I need a permit for and need to coordinate entry to is lawless. This is the area where they cut down my olive trees yesterday, and it isn’t the first time. I blame the army because there is an army post right by my grove, but the army does nothing. I also blame the settlement civilian security coordinator, he comes and goes on my land as he likes and is violent.

Yesterday, December 22 at 3 pm the Israeli DCO officer called me and informed me that trees had been cut down on my land, about 600 meters east of the settlement Adei Ad. He said there were about 33 such trees and sent me two photos. He said he would call the next day to coordinate a time to go to the field, meaning for me to be able to go to my grove and check on the situation.

On December 22, 2019, an officer from the Israeli DCO called and informed my son that many olive trees had been cut down on our family’s plot, southeast of the outpost Adei Ad. The officer informed us that 33 olive trees had been cut down. We planted these trees over 25 years ago. My son informed me of this and said we had to file a complaint at the Binyamin Police. Because we are required to coordinate access to our plot with the army because it’s very close to the violent settlement, we arranged to go to the plot that same day at 3 pm with the officer. The Israeli DCO officer, army representatives, an officer from the Palestinian DCO and my son met on our land. My son took photographs. The following day, December 23, 2019, I went to file a police complaint. After waiting for an hour and a half, I was finally seen and my testimony was taken.

The police investigator asked me, “How much financial damage did this cause you?” I realized the investigator had no idea what this violence means. I answered him “Your question is beside the point. This violence transcends financial damage. The trees that were uprooted – I planted them 25 years ago and since then I tended them as though they were my children. I feel as though I lost a family member. Since Adei Ad was established, these incidents happen all the time.” I went on to ask the investigator, “How long will this go on for?” I said that every time there’s an incident like this, everyone meets on our land, we file a complaint and then it happens again, and ultimately the case is closed. The investigator looked at me with indifference, my pain didn’t affect him or leave a mark. He doesn’t understand us and our pain.

I’m convinced that the authorities, all of them – the army, DCO and the police – collaborate to expel us from our land. It’s impossible that the soldiers in their post in the field fail to see the settlers when they make their way to our land, because they pass right by the post. Of course, the settlers want the army post to be there because it gives them a sense of security while they are committing their crimes. Any reasonable person would understand that if access to a plot requires coordinating with authorities then the authorities are obligated to fulfill their commitment to us, the landowners, and protect us from crimes.

On July 7, 2020, the police informed Yesh Din it had closed the investigation file due to “offender unknown”.
Silence is Golden