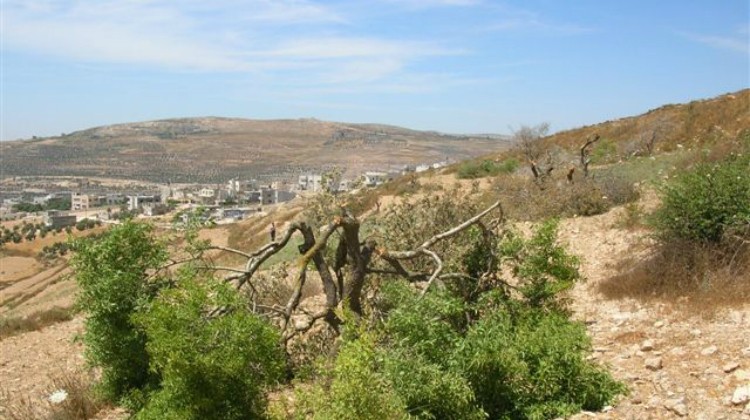 The grove where the olive trees were cut down is owned by six families. Each owner has a defined part of the plot and specific ownership over a certain among of trees (not equal). The plot is on the outskirts of the village, a short walk from the outlying village houses, and there are olive and other fruit trees planted on it. There were 51 trees on this plot, and they were all cut down.

The previous day, Saturday June 4, 2005 was a quiet day at the village. Several women from the village sat under the trees in this grove. In the late afternoon, three settlers arrived, and circled around the area where the woman were sitting. The women were frightened and decided to return home. They got home at about 6 pm.

On Tuesday, June 7, at about 10 am, I went to file a complaint with the Palestinian DCO in Rafidya in Nablus. They took my complaint but didn’t provide me with confirmation or a complaint number.

We have a plot shared by six owners and it has olive groves and other fruit trees. Each of us owns several trees. I own four trees on this plot.

On Sunday, June 5, 2005, I spent the day in Nablus. When I returned in the evening, the head of the village council came over to my house and told me that all my trees on this plot were cut down. I wanted to save myself the heartache, and I didn’t go check on the plot.

On Sunday, June 5, at approximately 10 am I went shopping by my house. The shop owner told me that MA had called him and told him that my olive trees had been sawed down, along with the rest of the trees in the shared grove.

I didn’t file a complaint because it was enough that MA filed a complaint with the police. There’s no point in going, they don’t do anything about complaints. In total there are 51 trees in this grove. I have 12 almond trees.

The Samaria and Judea Police lost the complaint filed by MA. It was recovered a year and a half later, only following Yesh Din’ intervention. On March 29, 2007 the police informed Yesh Din it had closed the investigation file due to “offender unknown”.
Silence is Golden