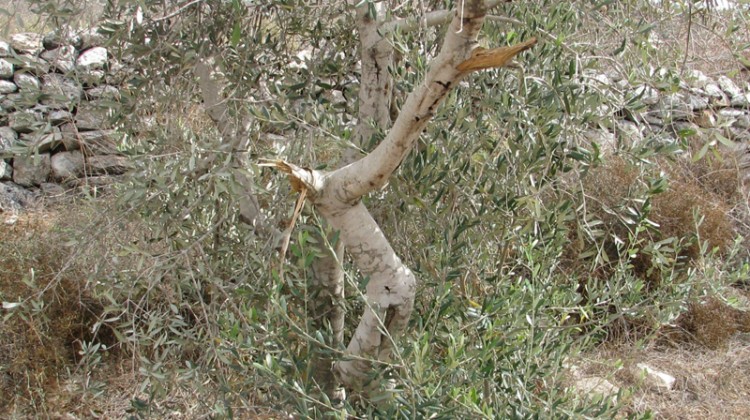 My plot is about two km south of Kafr Qadum, about 500 meters west of route 55. I have about 50 dunams. The land is registered in my father’s name, may he rest in peace, and it belongs to my brother, my sister and me. I’m the custodian of the land.

On Thursday, October 7, 2010, we went to harvest the olives. The last time I went to my plot had been in June. I got to my plot with my car by driving through the village al-Funduq and then walking to my plot to pick almonds and figs. I was there with my family and I checked the olive trees. I don’t go there alone because I’m afraid of settler attacks. I’m old and scared. Before we went in June, we had gone in April, my family and I went to plow. We had hired three tractors and drove on the path between the plots. At the time, there were a few settlers by the caves watching us, but the army arrived and prevented them from coming near us.

As I said, on Thursday October 7, 2010 we began the olive harvest. We were 13 people: seven from my family – my wife and sons and their wives – and my cousin with six. We came with everything we needed to harvest:ladders, tarps and buckets and we drove on the path between the plots. We arrived at around 7 am. We began harvesting the area closer to Kafr Qadum and everything there was fine. Once we finished that area, we went over to the direction of the caves, and that’s when we saw trees cut down and broken. We saw at least thirty olive trees sawed down and about twenty trees with broken branches. And then we saw, to our amazement, that most of the trees had been harvested. There were tarps on the ground.

I’m an experienced farmer and in June when I came to my plot, I estimated that this year’s crop would be 25-30 sacks of olives, fifty kg each. That same Thursday and Friday, my family and I harvested what was left, and it came to nine sacks, meaning about two thirds of our olives were stolen.

In addition to the tarps still out, we found a khaki colored water bottle that was also a small bag and which had all kinds of documents in it – a prayer book with the owner’s name written in it, a referral to a medical exam and other documents – we gave it all to the police, and there was a hand saw there too.

The settler from Kedumim whose belongings were found at the site claimed in his investigation that he had lost his bag, but claimed that he hadn’t been on Palestinian land. On March 17, 2011, the police closed the investigation file due to “lack of evidence”.
Silence is Golden