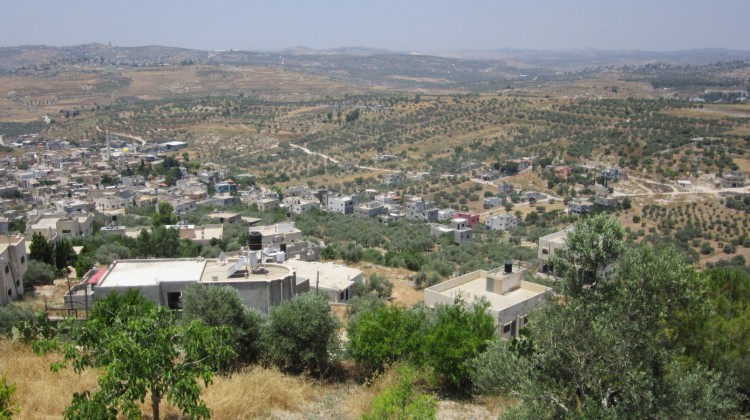 I own a plot of land, 25 dunams, in the lands owned by the village of Far’ata. My plot is 200-300 meters south-west of the outpost of Havat Gilad. There are about 170 olive trees planted there. During the past few years we have been forbidden from going to our land to harvest, except after coordinating with the DCO, which arranges an army escort for the harvesters for fear of settlers.

In November 2004, the other land owners and I coordinated the schedule for going to our land with the Israeli DCO in Kdumim. We also coordinated with Rabbi Arik Ascherman from Rabbis for Human Rights to arrange for a group of Israelis to join, for protection from the settlers.

On November 8, 2004 at 8 am, 50 Palestinians from the village were harvesting, as well as several Israelis, two military jeeps, two police cars and a DCO vehicle.

We began harvesting the trees in my plot. After about half an hour, fours settlers came up to us, including AZ (I found out what his name was later, when I heard him called). The settlers told us to leave, claiming they own this land. We asked the soldiers who were present to protect us, because we have the deed to the plot: the land and the trees belong to us.

The soldiers treated the incident like a “land dispute”, which needs to be sorted out at the Kdumim Police station. Meaning we Palestinians must prove ownership over the land. In the meantime, we were instructed to stop working in the field.

The police took until 3 pm to investigate this “land dispute” while we waited at the station and the others waited in the field and could not do any work. At 3 pm a fax came through from the Beit El DCO confirming we own the land. And we were permitted to continue harvesting.

We immediately notified the people who were waiting for us. Arik and I returned and continued working for an hour and a half. At 4:30 pm, we returned home with the olives we managed to harvest. The others also left.

The next day, November 9, 2004, more Ta’ayush and activists and other Israelis came to the village. At the intersection outside our village, we met the army and police and got to the plot at 7 am. We found burned olive trees, trees with severed branches, and trees with trunks that had been sawed.

Over 100 trees were damaged, various degrees of damage, and that’s just on my plot. Nearly all the olives we hadn’t managed to harvest the previous day were stolen. There were metal rods and sticks on the ground. We found tractor and jeep tire marks. We also found an ID car belonging to a settler from Homesh.

The damage was huge. As was the number of olives stolen. I can’t estimate the damage precisely, but not only my olive grove was damaged, a large amount of my neighbors’ olives was also stolen. I think that to get so much work done in one night, you would need many people.

The police called investigators from the Ariel Police, and they came and photographed the damage. The police took me to the Kdumim Police station, where I filed a complaint.

Two days later, while we were working in the field with an army and police escort, we saw a settler stealing olives from a nearby plot. We alerted the policemen and they caught him and took him – with the olives he stole – to the police station.

On November 25, 2004, the police informed us that we weren’t allowed to go to our land because they could not provide an escort. That same day, a peace activist called me us to tell me that he had passed by our land and saw settlers stealing olives from our plots. The peace activist and I both called the Kdumim Police, and I also went to the station. The Kdumim police and the DCO there informed the Ariel Police, and they sent police officers to our land. They caught two settlers stealing olives and brought them – with their loot – to the police station.

On November 27, 2005 the police informed Yesh Din that it had closed the investigation file on the grounds of “offender unknown”. After photocopying and reviewing the investigation file, Yesh Din’s legal team appealed the decision to close the investigation.
On June 12, 2007, over two and a half years after the incident took place, the State Attorney’s Office rejected Yesh Din’s appeal because of the suspects’ alibi claims (which were not corroborated by the police). The State Attorney’s Office suggested that the victim of the offence file a civil suit to pursue his claims.