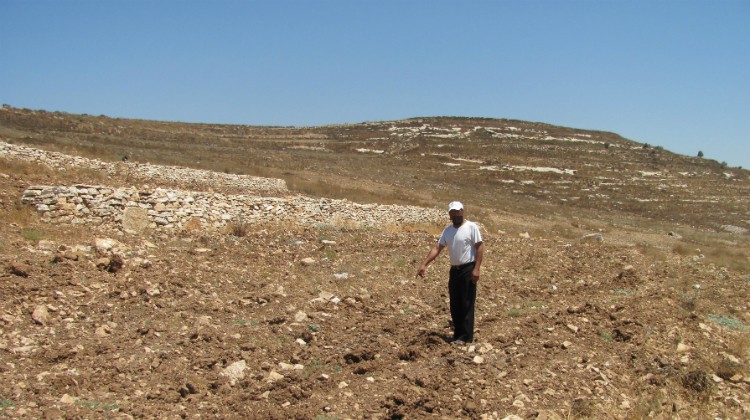 I live in the village Tell in the district of Nablus. I own farmland west of the village. This land is four km away from the village as the crow flies, but I have to drive about twenty km by car to reach them, because the settlers of the outpost Havat Gilad prevent access to the land.

My plot is west of Havat Gilad, 1.5 km from the outpost. I have twenty dunams of olive trees. Last January, I planted about two hundred olive saplings. There’s a well on my plot too.

A month after I planted the saplings, the settlers uprooted and stole fifty saplings. You at Yesh Din documented this incident.

I can reach my plot freely without any requirement to coordinate with the army, but we are afraid of going, as are other farmers because of settler violence. These are very violent and dangerous settlers. they repeatedly attack farmers and crops. The land in the area is owned by the villages Jit, Far’ata and Immatin.

On Friday evening June 29, 2012, S called me, he’s a farmer from Far’ata who owns land in the area and told me that he noticed uprooted saplings on my land. S also said that his son was in Tell and had passed there the day before just before dark, and on his way to the village he saw settlers on my land, he was afraid and didn’t get closer. Apparently, the people he saw there – they are the ones who uprooted the saplings.

On Sunday July 1, 2012 I went to my land. I counted 41 broken saplings. I called the governor of Nablus and informed him. He informed the Palestinian DCO and asked them to come and take a look. At noon on Tuesday, I met them on my land. There were representatives from the Israeli DCO, Israeli police and soldiers. They all took photos of the trees, and the Israeli police took my full testimony there in the field. I wasn’t given a copy.

Yesterday morning July 9, 2012 there was another incident that I didn’t yet report to authorities – I went to water the saplings and discovered that settlers broke the lock to the cover of my well, and the cover itself. They threw trash and rocks into the well. They also cut down twenty young trees with pruning shears.

On August 1, 2012 the police closed the investigation file due to “offender unknown”.
Silence is Golden