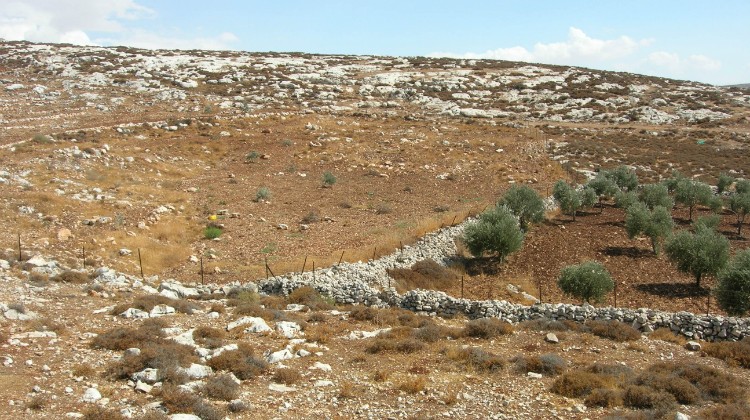 Mikhmas is east of route 60 on the way north from Jerusalem. The village residents farm, herd livestock and grow olives. There are 3,000 residents in Mikhmas.

The settlement Ma’ale Mikhmas was built in the 1980s, is south-east of Mikhmas, the outpost Mitzpeh Danny is by the settlement. The outpost Migron is between Mikhmas, Burqah and Deir Dobwan. We’ve had problems with the settlers in the past, including interfering with the olive harvest, uprooting trees, preventing access to our land, and so on.

I have a 5 dunam plot, my cousin NM and I own it. It used to be bigger, but route 60 divided it into two plots – east and west of the road. In the past, we didn’t grow anything there, but in 2007 we started tending the plot and planted 82 olive saplings that were four years old.

Last time I went to my plot, on September 10, 2009, I watered the trees. On the first day of the holiday, September 21, 2009, a herder from our village was in the area and told me that someone had damaged my plot. He didn’t see them. Right away, I went to see what happened and saw that all my trees had been damaged, broken and trampled. I managed to rescue 13 trees.

On October 1, 2009 I went to file a complaint at the Sha’ar Binyamin Police. The police officer went to my land with me. That week, AA’s olive groves were also damaged, his plot is close to mine (seventy trees were damaged), as well as AS’ (25 trees damaged), and AM, who owns the neighboring plot (forty olive trees).

We are convinced that settlers are responsible for the damage. Our problems started after the outpost Migron was expanded and the outposts around it were built.

On May 16, 2010, the police informed Yesh Din that it had closed the investigation file due to “offender unknown”.
Silence is Golden