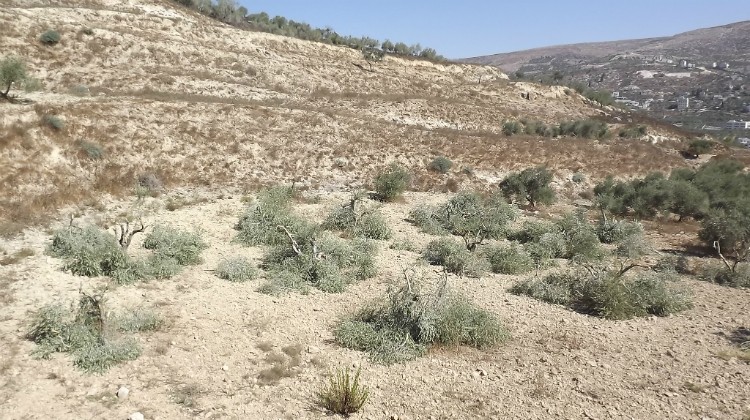 I live in Burin, I inherited five dunams of land from my father on the southern side of the village. Three km north of the settlement Yizhar. There are about sixty olive trees on the land aged 70 and older on the plot. The settlers in the area who come from Yizhar are very violent. Two years ago, they burned forty of my trees. Every year before the olive harvest the settlers torch and cut down trees.

On September 5, 2012 MK called me at 10 am, he lives in the village and works for Yesh Din, he said that were trees cut down on my land. I immediately went to the village council and notified them, and from there I went to my land and found 18 trees cut down – they sawed the trunks and broke the branches.

Two weeks earlier, I had been to my land and everything was fine. I don’t have any witnesses who saw the settlers, they usually do this at night. The trees they cut down were large and rich with olives, and my estimate is that I lost 150 kgs of olive oil, every kilo sells for about ILS 30. The problem is that in addition to this immediate loss, I estimate it will take about ten years for the trees to produce a comparable amount of olives.

On September 19, 2012, two weeks after the incident, the police closed the investigation file due to “offender unknown”.
Silence is Golden