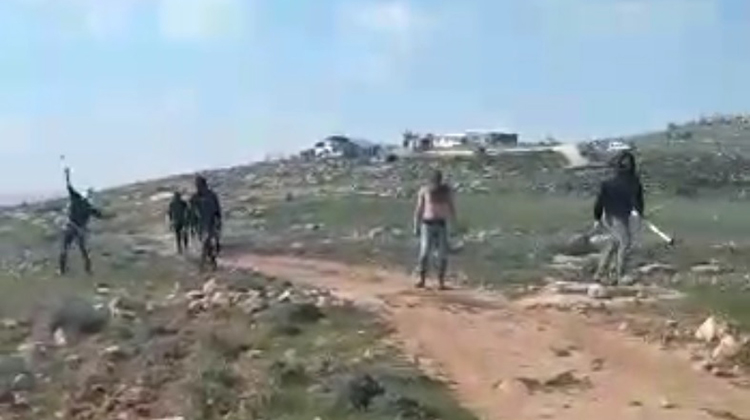 I work in construction in Israel. I own a plot of land close to the settlement Mitzpe Yair. In many cases, the settlers damage my land by bringing their flock to graze on my crops, wheat and olive trees, and they also try to intimidate us and prevent us from continuing to farm and cultivate our land.

Since 2012, my family and I have been growing crops on this land and cultivating and tending it. We go to our land without needing to coordinate for most of our land. The area that’s close to the settlement – we have to coordinate in advance with the Civil Administration to be able to go there.

I’ve filed several complaints against settlers in the past years because of acts of aggression against us and our land. In 2021, settlers uprooted 150 new olive saplings. In 2020, the settler called Y and those with him brought their flock to graze on an area of 70 dunams. This caused a lot of damage for me, estimated at dozens of thousands of shekels. Y is a settler and a shepherd, he lives in Mitzpe Yair and is in his 20s, I know who he is, and people here know who he is, especially residents of Qawawis.

On March 13, 2021, I left my house in Umm Lasafa at around 8 AM with my wife and sons. We drove to our land in my car to tend the trees and weed and check on the crops.

We got there at around 8:40 AM. When we got out of the car, we discovered the settler Y who was herding his flock there. He had about 50 white animals. He brought them to graze on my land, where I had planted wheat the previous winter to be exact, in 2020.

I saw him on my land. We were about 150 meters as the crow flies from the mobile homes in Mitzpe Yair. I called the Israel Police, I dialed 100, I alerted them that he was herding his flock to graze on my crops and asked them to come and arrest him. I was close to Y, just a few meters from him and he heard me talking to them. I asked him to stay until the police and army arrived so they would see him with his flock on my land and my crops and catch him in the act. My wife was also close by, about ten meters away, and she filmed him on her phone. The kids were still in the car. The youngest is 18 months old and the eldest is 15.

The settler Y called his friends. I could understand from the conversation that he told them I managed to film him with his flock on my land, and he asked them to come and break the phone that we used to film. Approximately five minutes later, about 12 young settlers arrived from the direction of the settlement Mitzpe Yair, they were in their 20s, masked and wore ordinary clothes. They weren’t armed with weapons, and they didn’t have any dogs. I noticed one of them, who was wearing a black leather jacket, he was 1.75 meters tall and was holding a metal pipe in his hand. Y’s older brother was with them and he wasn’t wearing a mask. I recognized him from previous clashes.

When I saw them, I went back to my car to protect my kids and wife. Once they got closer, some of them began throwing rocks at us and the car. Suddenly, one of them went over to my wife and hit her with the metal pipe on the wrist of the hand she was holding the phone with and filming to prevent her from filming, fearing we would give the police the video. After that, he attacked me and hit me in the face with a metal pipe. I felt my strength drain and I fell down and started yelling from the pain. They ran back to the settlement. I lost consciousness.

When I awoke, I found myself outside the settlement surrounded by soldiers who gave me first aid. After that, a Palestinian Red Crescent ambulance arrived. The soldiers transferred me into the ambulance, which took me to Al-Ahli hospital. After tests and x-rays, they found that my jaw was fractured in several places. Two days later, they decided to operate on me to set my jaw. They stitched up my face and inserted a metal bridge to set my teeth and fractured jaw.

After I was released from hospital and despite my condition, I went to the Kiryat Arba Police on March 16, 2021 and filed a complaint after waiting for about an hour. The police took my testimony in detail, as well as the phone we filmed the incident with and took all the photos of the settlers. I informed the police that the same settler beat my wife and me. He was a young man, around 22, he wore a black jacket and I saw him on my land the week before that too, without a mask, and wearing a brown jacket.

I won’t be fit to work for at least two months. This attack harmed my family’s livelihood. The damage assessment for the car is between 3,000 – 4,000 shekels.

Rima Awad, 40, married and the mother of five, Umm Lasafa

I’m a housewife. My husband works in construction in Israel. My husband has land in the area of Qawawis by the settlement Mitzpe Yair. Every week my husband and I take the children to our land to work there, weeding, cultivating, and to check on the crops and trees.

We know that the man who brings the flock to graze on our seasonal crops is a settler named Y who is about 22 years old, and we have photos of him. He is thin, medium height and is protected by the rest of the settlers in the settlement. The police aren’t satisfied by the information we provide when we file a complaint, and they ask for photos to prove his involvement.

On March 13, 2021, we left the house at around 8 am. I was with my husband and several of the children. We drove to our land in my husband’s Toyota. We got there about 20 minutes later. When we arrived, we found the settler Y grazing his flock on our land. My husband informed the police immediately and I started filming while the children stayed in the car.

Y informed his settler friends what was happening and they came quickly to throw rocks at us. There were over ten of them and they were masked. They yelled and cursed and threw rocks at us and at the children, who were in the car. My husband asked me to move back. I filmed the shepherd and the flock on our land with my phone. They threw rocks for a few minutes.

After that, one guy arrived holding something that resembled a bat and he attacked me and hit my left hand. He tried to take my phone but he wasn’t able to because he turned to my husband and managed to hit him in the face with a pipe – not a bat like I thought. After he hit my husband, who fell to the ground, they ran away, maybe because they were afraid he was killed or about to die.

I started yelling and calling for help. I went to my husband, who was bleeding from his face and mouth. I called my family and my brothers. My father arrived fifteen or thirty minutes later – I can’t remember. It was terrible. Our lives were in danger. I asked the kids to get out of the car so that they wouldn’t be an easy target and wouldn’t get hurt by the rocks that hit the car. My daughter and younger children were crying.

The police arrived at the settlement and didn’t come to where or help us, and they didn’t arrest the attackers. This is also true for the army, which didn’t arrest a single one of them even though they were close by. They immediately gave my husband first aid and then evacuated him on a Palestinian ambulance that belongs to the Palestinian Red Crescent. Several Israeli ambulances also arrived at the settlement and they could have taken us to an Israeli hospital without having to wait for a Palestinian ambulance, especially since this was an injury due to the settlers’ attack and he was in bad condition. The army paramedics and Magen David Adom ambulance treated us properly and gave my husband and I first aid.

On March 1, 2022, the police informed Yesh Din it closed the investigation file. It did not provide the reason for this decision.
Silence is Golden