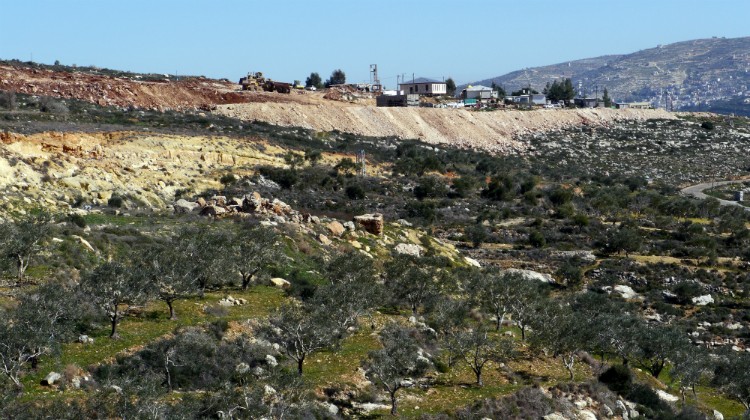 I live in Iskaka, I have a family and am a farmer, I’ve served as the head of the council since 2003.

I own 30 dunams south-east of the village, just by where the settlers built the outpost Nofei Nehemia. I have the documents proving the land is registered in my name.

In 2001 I planted 200 olive trees on my land. In 2003, the new outpost which was then called Rechelim West was built east of our village and just by my plot, today it’s called Nofei Nehemia. For a few years I had free access to my plot and I tended my olive trees. In 2007 without any notice or warning, the settlers of Nofei Nehemia fenced off the outpost and my plot and land belonging to other residents of Iskaka was trapped inside the fenced off area. Since then, people from Iskaka and I cannot access our land.

At the time, I filed a complaint to the Palestinian DCO, which transferred it to the Israeli DCO. I then requested assistance from the governor of Salfit district. The governor directed me to the Palestinian Authority’s office that deals with the struggle against the wall and the settlements. The office assigned a lawyer to take on the case of landowners from Iskaka who were harmed. We gave the lawyer power of attorney and all the necessary documents. The lawyer has been taking care of the case since, but we have no information about any progress.

About two weeks ago, they began levelling the soil with bulldozers and heavy machinery on my plot and on land owned by other residents of the village. That very same day, I filed a complaint to the Palestinian DCO. I know that the complaint was transferred to the Israeli DCO. I also informed the Palestinian governor. Tomorrow I’ll file a complaint with the Ariel Police.

MA, 64, married and the father of six, Iskaka

I live in Iskaka, I’m married and I have four sons and two daughters. I’m the only breadwinner, I’m a farmer. My family owns 6.3 dunams of land, which we inherited from my father, they’re two km east of the village. They are 50 meters from the land where settlers built the outpost Nofei Nehemia.

In 1958 my brother and I planted 250 olive trees. We have 80 trees left. The settlers uprooted or cut down the rest.

In 2002, the army took over the land and soldiers expelled us from our land. After that, the army set up two mobile homes for the soldiers’ use. This went on until 2003 and then we began to see settler activity. In 2004 we saw settler families and in 2006, they built and expanded the outpost and built permanent structures. They began leveling the soil, including my land and that same year they fenced off the land using coils of barbed wire, which are still there.

Since 2006 I haven’t been able to access the land. There were several times I attempted to go there, but armed settlers came and forced me to leave. About a year ago, settlers set up some poles on my land [for eruv] and that’s how things stand. My fear is that they will build on my land.

I’ve complained to the Palestinian DCO several times in the last few years, and they transferred my complaint to the Israeli DCO, but nothing happened. Now I sense that the settlers have plans to expand.

On June 18, 2016 the police closed the investigation file due to “lack of criminal culpability”.
Silence is Golden