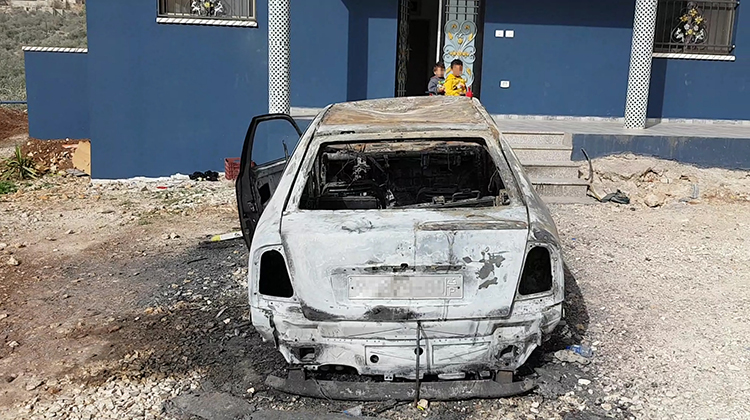 My husband, our three children and I have lived in the new house for five months. I’m a housewife. We never paid much attention to the settlers or the army.

On Thursday December 20, 2019, my husband got home at 10 pm after he bought vegetables for us. We were all awake, we were waiting for him to arrive so we could prepare a meal. We made dinner, ate and the children went to sleep. At midnight, my daughter, the baby, woke up and fell back asleep. Between 1-1:30 am she woke up again and I got up to nurse her. I heard dogs, people prowling around outside by the window. I was scared.

Then I heard someone playing with the door handle on the east side of the house and pushing it, as though they wanted to open it. I also heard spraying and a constant humming from above, it didn’t sound like an ATV or a drill – it was softer. I was very scared, I was shaking with fear and I went to cover the children so they wouldn’t hear the noise. I hesitated and then I saw fire outside. I woke up my husband and told him there was a fire outside.

I called my husband’s nephew and told him what was happening and also called my father, who lives in the next village over. I tried calling others too, but I just couldn’t because I was so panicked. I followed my husband to the door. We went outside and he started screaming to wake up the neighbors. I went inside the house to fill a pail with water and poured it over the flames, but they only got bigger.

I don’t remember exactly but our neighbor came and took us over to a house nearby, below our house to the south. After the fire truck arrived, we went back home and found a slogan painted on our balcony in Hebrew.

Now I live in fear worrying about our children and the possibility they’ll come back and burn down our house. The children talk about the incident, and they’re scared of the settlers and what they’ll do to us. We haven’t been able to sleep at night since Friday.

My house is on the south side of the village. My wife, our three children and I live in our house, the eldest is four and the youngest is a year old. We live approximately half a kilometer from Havat Gilad as the crow flies, but until now we didn’t suffer from the settlers. Soldiers never came into our house and in general we didn’t have any contact with them. My car is a 2002 silver Skoda and I use it to drive people around the village and to Funduq. That’s my only job.

On Thursday, December 19, 2019, I got home at 9 pm and parked by the entrance. My wife and children were waiting for me, I came inside, we ate, and I went to bed at 11. My wife woke up at 1:30 am to nurse our daughter. She woke me up at 2 am when she heard noises. I opened the front door and saw the fire. We tried putting it out with ten pails of water and a hose, but it didn’t help. After about five minutes, the car burned. The fire truck arrived quickly from Hajjah and extinguished what was left of the car.

My nephew, who lives nearby, has a Volkswagen Polo that doesn’t run, he keeps it for parts. It was also burned. After we put out the fire, we noticed a slogan in Hebrew painted on our balcony: “Quiet will be met by quiet, regards from Kumi Ori [outpost].”

At 8:30 am, five border police jeeps arrived as well as the police and Israeli DCO. A police officer with an interpreter who took testimonies from my wife and me. They left at 10:30. I didn’t receive any documents from them.

The car cost 50,000 shekels. There’s also damage to the wall of our house and a burnt light fixture on the balcony ceiling. Since this incident we’ve been living in fear. I don’t sleep at night, so that what happened in Duma doesn’t happen to us.

On November 4, 2020, the police informed Yesh Din it closed the investigation file due to “offender unknown”.
Silence is Golden