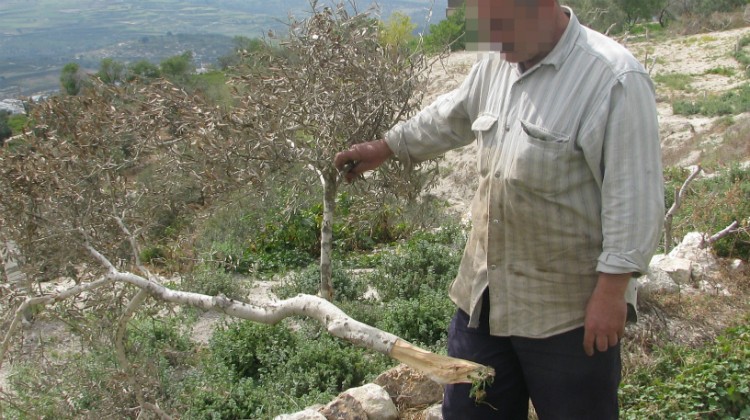 I own three dunams, which I inherited from my father, who inherited them from his father. There’s a deed in my grandfather’s name. There are different kinds of trees on my plot, 16 mature olive trees that were planted before I was born, one hundred almond trees, twenty pomegranate trees, 22 fig trees that my father planted, two mulberry trees and two loquat trees that I planted seven years ago. There are also za’atar bushes and saffron plants. My plot is about 150 meters south of the last house in the village, and 1.5 km from the outpost Havat Gilad. I go to my plot every day in the afternoon and work until the evening. I don’t need a permit because I can walk to my land.

The trouble with the settlers of Havat Gilad and my plot started three years ago. They came to my land about ten times. They come in a white Subaru, usually there are four, and one stays behind the wheel. Sometimes they come in an ATV. The last time I encountered them was in August 2009, my children went to pick cactus fruit, there’s a row of cacti on my plot. When I was on my way over to the plot, I met my children halfway there – they were running away from the settlers, who were on my land. When I got to my plot, I saw the white Subaru, there was one guy behind the wheel, and on my brother’s plot, which is adjacent to mine, three settlers were uprooting saplings and barrels. They ran away when they saw me. I recognize two of the three, one is short and red-haired with side locks and he’s a bit full, wears a kippah. The second is thinner, tall, also has sidelocks and wears a kippah. Another incident took place in the middle of January 2010, when I discovered they tried to uproot my za’atar bushes and damaged some of them. I haven’t filed any complaints because the damage was minor, and I didn’t see the need file a complaint.

On Friday, March 18, 2010, I went to my plot, and everything was alright. The next day, after prayers, my son came to me and told me that two people from our village who were picking almonds saw two settlers on my plot, and when the settlers saw them, they got away in a white Subaru that was waiting for them.

When I heard that, I decided to go to my plot, and seven people joined me. When I got to my land I saw a horrible sight. Many trees had been cut down – around fifty almond trees, two mulberry, two loquat, 31 olive trees, ten pomegranate and 11 fig trees. All those trees had been cut down and were lying there. They also ruined my saffron plants. I continued to check on the damage and when I got closer to my brother’s plot, I saw a white Subaru full of settlers and a Mitsubishi SUV full of settlers. When they saw me, they stopped and started walking towards me, but then they saw the rest of the people and began running away. Suddenly I saw four soldiers between us and the settlers, I don’t know where they came from. Maybe they were soldiers always stationed at the edge of the settlement. They made us leave the plot. I tried explaining what had happened, but the soldier wouldn’t listen and continued to force us back towards the village and the settlers stood by watching. Then a border police jeep arrived with an army jeep and the settlers ran away. They didn’t allow us near the plot and I don’t know whether they took photos because we went back to the village.

On February 1, 2012, over two years after the incident, the police informed Yesh Din that is had closed the investigation file due to “lack of evidence”.
Silence is Golden