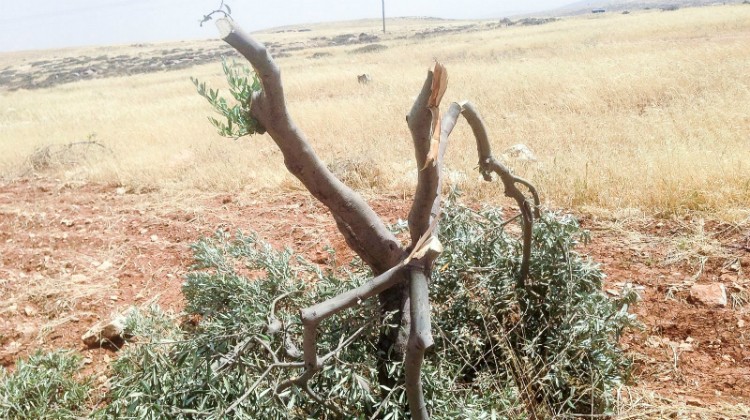 I’m 54, I live in a-Taybah, I own a metal work business, I’m married and the father of two daughters and two sons. I own land east of the village, by the access road to the settlement Rimonim. The plot is 7.7 dunams. Allon Road crosses my plot. On the northern side, which is three dunams I planted 80 olive trees seven years ago. The olive grove is fenced and can only be entered through a locked gate. We plant wheat, barley and other crops as necessary on the southern plot. I have the deed to the plot.

On May 24, 2018, people from the village who passed by my land saw trees cut down and called me. I immediately left the village and drove to the plot. I saw that about 40 trees had been broken, that’s half of the trees on my plot. They had sawed and broken them. Judging by the color of the leaves on the branches that had been cut off, I think they were cut several days before I went to my plot. I visit my land once a week. I had visited the plot a few days before I discovered the cut down trees, and everything seemed fine. That same day, the settlement civilian security coordinator of Rimonim passed and asked where I was from. I said I’m from a-Taybah. He walked back, stood and watched me from far away.

On the day I discovered the trees had been cut down, I called the Israeli DCO. An army jeep arrived, as well as police. They took my testimony and took pictures of the broken trees. Later, a forensics team arrived and took fingerprints. The police also took pictures of a Star of David that the settlers had sprayed on one of the rocks. While the army and the police were on my land, we walked north and saw there were also trees cut down on the plot nearby owned by my neighbor.

I’m 40, I live in a-Taybah. I’m married and I have a daughter and a son. I own a hairdressing salon in town. I inherited 4.5 dunams of land from my father, it’s about 150 meters from Allon Road by the access road to the settlement Rimonim. There are about 100 olives trees there which are 16 years old.

I informed the Israeli DCO. They promised the police would come. In the afternoon the army and police arrived. They photographed the trees that had been cut down and took my testimony. The police officers told me that if they needed me, they would call me. They haven’t called me.

On July 23, 2018 the police informed Yesh Din it had closed the investigation file due to “offender unknown”.
Silence is Golden