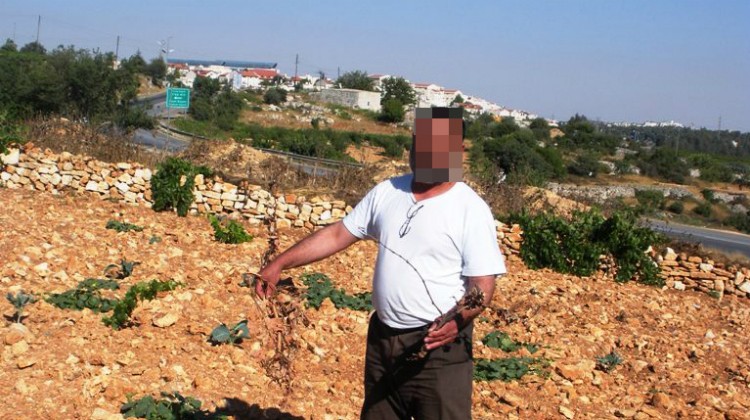 I live in the area of Khallet Sakariya. It’s between Alon Shvut, Kfar Etzion, Rosh Tzurim, Elazar and Bat Ayin.

I own about ten dunams of land, most of it has grapevines planted on it. The plot overlooks the road leading from route 60 to the settlements Kfar Etzion and Bat Ayin. We usually didn’t have problems with the settlers. We have good relations with the settlements nearby and until this past month we weren’t harassed by them. Actually, there were previous harassments, occasionally our saplings were uprooted but we refrained from filing police complaints in order to maintain good neighborly relations.

On June 18, 2011 I woke up at 6 am and saw that someone had painted slogans on my brother’s house, who lives by me, slogans in Hebrew: “death to Arabs”, “revenge for Ali Ayin”. I immediately called the village head and told him what I saw. He called the police.

At 7 am, I went with my friend to check whether thing else happened and discovered that their revenge was uprooting my grapevines in my orchard by my brother’s house. They uprooted 36 grapevines and damaged my seasonal crops. They uprooted my fakus and cabbage plants, approximately 150 plants.

At around 8 am, the police came. A police car with a single policeman from Etzion Police. The officer photographed the damage and walked around the plot. The officer called the forensics unit, which arrived an hour and a half later and took photos and checked as well.

At around 9 am, we went to file a complaint at the Etzion Police. The police [station] is close to my home. We were let in only at around 12 pm.

The next day I came to my plot and saw that apparently that night someone came and damaged it again. This time they uprooted thirty grapevine plants I planted this year. I didn’t file a police complaint.

On August 22, 2011 the police informed Yesh Din that it had closed the investigation file due to “offender unknown”.
Silence is Golden