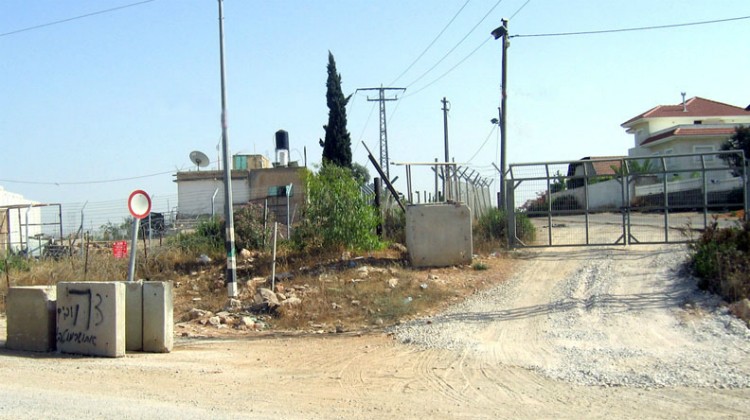 HA, 48, married and the father of six children, Mas’ha

Ever since the fence was built, I’ve had problems with the settlers. Often, they throw stones at the house, curse and use foul language. Even when I’m on my way to and from work I run into settlers, who tend to stand on the bridge by Elkana’s gas station. When I pass under this bridge, they throw anything that they can get their hands on – bottles, stones, trash.

A year and a half ago, on January 4, 2004, settlers threw stones at my house and broke the water heater’s solar panels. I filed a complaint at the police at the Israeli DCO at the entrance to Qalqiliyah. Later I was summoned to the Ariel Police to testify again. I filed three complaints.

On June 13, 2005, at 1 am I heard dogs barking from the direction of Elkana. I have learned that this means that people are on the road. I went outside and saw seven young men, approximately 20 years-old walking on the road from the direction of Elkana. They followed the road until they were about 50 meters from my house, and then they immediately turned around and walked back. At 1:15 am, they stopped on the road in front of my house, 10-12 meters away and began throwing stones at us. They didn’t see me. I could see them, but I couldn’t make out details, because while my house is lit by two bright lights, the stone throwers were standing in a dark spot.

I was worried about my six kids waking up and getting scared. I called TB, a settler I know from Elkana and asked him to find out who the stone throwers were, so I could talk to them. TB said he’d find out what was happening, but he didn’t get back to me.

I called the Kdumim Police. Someone I didn’t know answered. I told him about what was happening. He said he’d take care of it. The stone throwing went on for about 45 minutes.

At approximately 1:50 am, an army jeep arrived, and the settlers ran away. There were two soldiers in the jeep. I told them about what had happened. They walked with me to the spot the stones were thrown from, but the young men were no longer there. The soldiers walked with me to my house, shined a light and found clear signs of stone throwing on the wall.

In the morning just after 6 am, I left for work and didn’t manage to check on the damage. Around 10, while I was at work, H from the DCO in Kdumim called me (I know him from a previous incident). I told him about what had happened. He asked me whether any damage had been done, I said I hadn’t checked yet, but that it was likely that the two solar panels for our water heater were broken, like they were previously.

On Wednesday June 15, I went to the Israeli DCO at the entrance to Qalqiliyah to file a complaint. I got to the DCO gate at 7 am. The soldier at the gate said I’d be called. I waited there for three hours. At 10 am, a jeep left the army base. I asked about S, whom I know and was told he wasn’t there that day. I called H, who said he was in Ramallah and that S was not going to be there that day either. Three days after the incident, the Palestinian DCO in Salfit came to investigate. We went up to the roof and saw the broken glass. There was glass from the incident last year and from this recent incident. You can clearly tell the difference between the old glass and the newly broken glass.

On July 17, 2005 the police informed Yesh Din that is had closed the investigation file due to “offender unknown”.
Silence is Golden