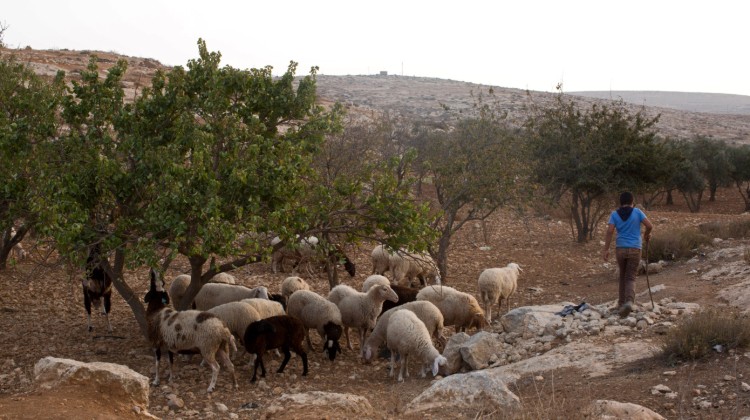 I live in Qusrah, I help my father herd our livestock. My father owns seventy goats. Our house is on the southern side of the village. The outpost Esh Kodesh is about one km south-east of our house. There are other outposts in the area, farther away like Adei Ad. Usually I herd the goats east of the village. Sometimes settlers come to harass the herders, a week ago settlers attacked our neighbor AT [a complaint was filed with the assistance of Yesh Din]. Sometimes they come into the village, all the way to our home. A month ago, late at night, my father heard a noise from outside and saw four settlers. When he asked them what they were doing there, they replied “you go away!” Often, they come with dogs.

On Wednesday December 15, 2010 at 7:30 am, I took the goats to an area called Basilta, between my house and Esh Kodesh. At 8:30 a settler came on horseback to where the herd was grazing and told me in Arabic not to get any closer to the outpost Esh Kodesh. About an hour later, the settler returned with another settler. One of them set a dog on our herd, but our dogs chased him away. The settlers left without speaking to us.

At 1 pm I started back home. On the way, I met two other herders. After we said goodbye and each headed home, I saw two settlers come out from between the boulders. One of them was the one I saw earlier, on horseback. This time he was masked but he wore the same clothes as before, gray corduroys and a black shirt, he wore a large kippah and no fringes. He was taller than me, with a short beard, he was stocky and looked about twenty. He held a large knife. I can’t identify the other guy.

They were about one hundred meters away. They shouted, “come here”. I was very scared. I saw them throw rocks at the goats. I saw one of them try and slaughter a goat. They killed two pregnant goats with rocks and wounded another goat in the head. Another pregnant goat miscarried. After a few minutes, the attackers ran off towards the outpost.

I called up my father and he phoned the Israeli DCO. At 3 pm my father and I went to Ariel Police and filed a complaint. The police officers told us to take the goats to be checked by the vet. At 6 pm an Israeli DCO jeep arrived and we went to the site of the incident. The police photographed the goats. We estimate the damage at about ILS 6,000, not including the goats’ miscarriages.

Since then, I’m scared to go out and herd the goats.

On May 22, 2011, the police closed the investigation file due to “offender unknown”.
Silence is Golden