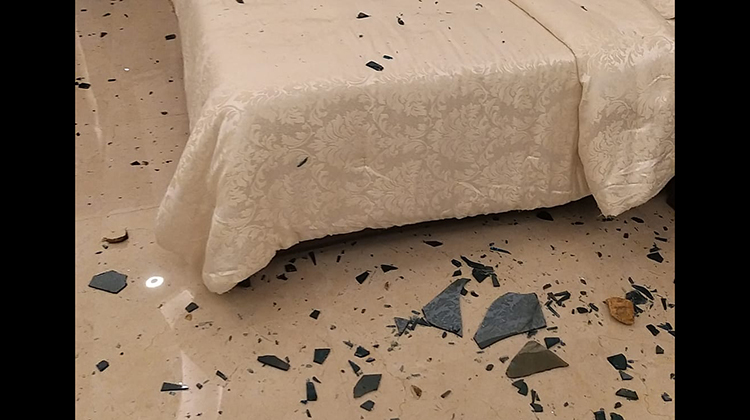 I worked in Israel as a mechanic between 2001-2003. After that I started working in a garage in Huwarah and moved there. The garage is on Highway 60. A lot of Israelis bring their cars to be fixed at my garage, including settlers and of course a lot of Palestinians. In 2005, I married the garage owner’s daughter and became a resident of Huwarah. We have three daughters and a son. The oldest is 12 and the youngest is 10 days old.

In 2013, I started building my house. At the beginning we lived on the ground floor. There’s also a second floor and a rooftop with a balcony and large windows and two additional bedrooms. This past July, I moved to the second and third floors and closed off the ground floor.

I never suffered from army harassment or violence. In 2019, settlers came and threw rocks and shattered windows, but I didn’t report it to anyone. After the incident in 2019, I decided to install cameras around the house, covering four directions.

On Thursday December 31, 2020, I was home with my family. My wife, my children and I were sitting in the living room on the top floor. It was 9:30 pm. My house overlooks Yitzhar traffic circle and every few days the settlers walk around and riot on the road. They throw rocks at the cars. The traffic circle is lit, and you can see everything.

We were sitting on the top floor in the living room. My wife went downstairs to check on the baby on the second floor. As she walked downstairs, I heard glass shattering and rocks. My wife screamed: “Settlers, settlers, I’ve been hit in my right leg but I’m running to the baby”.

I was sitting with the children, who then started crying. I calmed them and put them in the bedroom. My wife took the baby and came upstairs to join us. I went out on the roof and saw a group of settlers running towards the Yitzhar traffic circle, east of our house.

I went down to the first floor and into the bedroom. There’s a huge window facing east, the entire pane shattered andlanded all over the beds and in the baby crib. They also shattered a window in the hallway.

I called the mayor right away and he arrived ten minutes later. I went out to greet him and we walked around to examine the damage. The mayor called the Palestinian and the Israeli DCOs and reported the incident. In the security camera footage you can clearly see settlers throwing rocks at the house and then running away.

At 10:30 pm, two army jeeps pulled up as well as a DCO jeep. Four soldiers and an officer came inside. They took photos of the shattered glass, went to the security camera monitor and took photos of the footage and took my information including ID number, etc. They also collected rocks in a bag and took them. They told me to come to Huwarah DCO on Sunday and file a complaint. They stayed for about an hour and then left. My wife, my children and I couldn’t fall asleep all night long.

The damage: the large living room window and the glass-walled balcony on the top floor – 10,000 shekels, the window in the hallway – 800 shekels, another balcony window – 2,500 shekels.

On August 25, 2021, the police informed Yesh Din it closed the investigation file. It did not provide the reason for this decision.
Silence is Golden