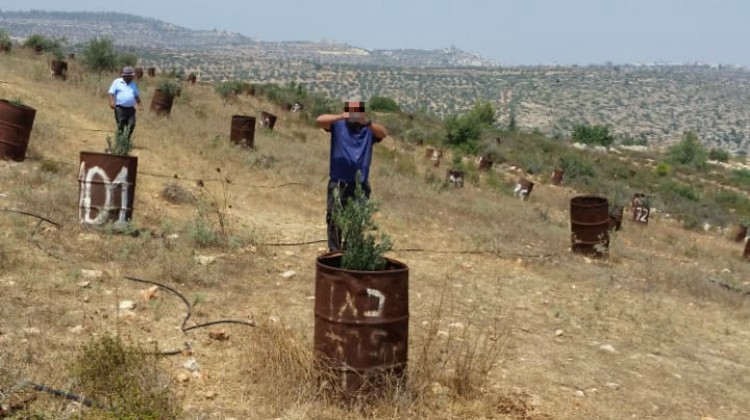 Mohammad Darwish, 67, married and the father of six, Beitillu

I live in the village Beitillu, in the district of Ramallah. I’m married and the father of four sons and two daughters, who are all married and have their own families. I live with my wife in our house in the center of the village. I’m retired, I used to teach science. Now I farm my land.

I own land east of the village, about one kilometer from the center of the village, I have five dunams of land. The plot borders the settlement Nahaliel, it’s about 50 meters from the settlement gate. I haven’t had free access to the plot since the second intifada. The army only allows me to go there after coordinating twice a year for two or three days. There were years when I was only allowed to go to my land during the olive harvest, and the rest of the year, the soil was neglected. I own another plot which is also five dunams. I grow seasonal crops on it. It also borders the settlement Nahaliel.

The coordination system is very problematic. They don’t give us the dates at the right time. Sometimes they give them before plowing season begins, and sometimes after the harvest season. Because they prevent us from accessing our land, we haven’t planted additional trees. I need to reach my land and farm all year round, but I can’t.

At the beginning of the second intifada, in 2001 there was a lot of settler violence. There was a surge in violence in 2001-2004, settlers attacked farmers, attacked livestock, cut down trees and damaged the crops in the fields. The settlers from Nahaliel are very violent. A lot of landowners are scared to go to their land. The army and the police protect the settlers instead of us.

Like everyone else, I’m afraid of going to my plots. I tried talking to the Israeli DCO and asked for protection, but they didn’t take any notice. The Palestinian DCO transfers complaints to the Israeli DCO but they don’t respond. In the past two years, after settlers attacked a farmer and nearly killed him, I haven’t gone to my plots by Nahaliel. The settlers and Israeli authorities are collaborating to force us off our land.

I also own land farther away from the settlement, west of the village where I work and make my living.

On July 16, 2018 for the first time in two years, I went to our land by Nahaliel with my brother and neighbor who owns land by my plot. We decided to go there because we started, like all the villages in the West Bank, the process of land registration on behalf of the Palestinian Authority. We wanted to measure, bring a professional surveyor and take care of the status of the land.

We left at 12:30 pm and arrived at the plots at about 2 pm. I was amazed to discover that the settlers had set barrels on my land and planted about 40 olive trees in them.

Our neighbor went over to his plot, which is about 100 meters away, but at an angle out of our sight.

Suddenly I saw a settler arriving in a car, I don’t know what kind it was. He was about 40 and had a child, probably his son, about 12 years old. He came over to us and said to me in broken Arabic: “Give me your ID.” I replied in Arabic: “You’re not a police officer or a soldier, why should I give you my ID?” I think he understood. He asked me again in in bad Arabic: “What are you doing here?” I answered, “I’m on my land, what are you doing here?” He asked in Arabic: “Do you have the deed? Prove it!”

As we had come to formalize the registration of the plot, I had copies of the deeds, the purchase and tax receipts for payment I made during Jordanian rule. So I spontaneously said: “Yes. I have the deeds, here they are.”

I raised my hand with the documents. The settler grabbed the papers out of my hand and threw them at his son who ran away very quickly into the settlement. My brother filmed it all. I started shouting so our neighbor would hear me and come, which he did. The settler, who heard me shouting came up to me and grabbed my right hand and twisted it so hard that I felt it was breaking. I started shouting even louder because it hurt so much. My brother was also shouting, he didn’t come near because he was afraid the settler was armed.

The settler released my arm and started filming my brother and I on his phone, while speaking into the camera on his phone in Hebrew. I didn’t understand what he was saying. I wanted to call the Israeli police, but unfortunately the phone battery died. I started yelling that I wanted the police or the army and told the settler to bring the police or army.

A few minutes later, an army jeep did arrive with four soldiers and an officer. When the settler saw the army, he pushed his way to the soldiers and talked to them, in Hebrew of course. After that, the soldiers came over to me aggressively, like they were coming to arrest a suspect and said: “Hands up”, “Take everything out of your pockets”, they searched me and my brother as though we were suspects. They spoke to us in Hebrew. I told them to speak Arabic or English because I don’t understand Hebrew. The neighbor, who speaks some Hebrew told the soldiers about what had happened.

The entire time, the soldiers and the settler spoke Hebrew with each other. I told the soldier I wanted the documents that the settler and his son had stolen from me. The settler denied taking them.

While we were talking to the army, another settler, who was armed arrived, apparently from the settlement security in Nahaliel. At that moment I used my brother’s phone to call the head of the village council and he arrived a few minutes later. I told him everything that happened, he spoke to the soldiers and told them we wanted the documents back and that they needed to deal with the settler. The soldiers didn’t take him seriously. The officer who was talking to us kept saying that there was nothing he could do to the settler.

I asked the officer to call the police. He refused and said: “If you want the police, get them!” He also said, “You have 3-4 minutes to get out of here.”

The head of the village council immediately called the Palestinian DCO and informed them of everything that had happened. The Palestinian DCO said they would transfer the complaint to the Israeli DCO and in the meantime not to leave until someone came. But the soldiers said again: “Leave now or we’ll use force”. We were scared and left. The settler stayed.

Towards the evening, my hand swelled up a lot and hurt a lot all night long. In the morning I went to the hospital in Ramallah. They x-rayed it. They didn’t find any fractures, but I had torn a ligament. I rested at home for three days. I still feel pain in my hand. I can’t bend my fingers and it’s still swollen.

On July 19, 2018 I went to the Sha’ar Binyamin Police and filed a complaint. I gave testimony concerning everything. The settlers trespassing and planting trees, theft of my documents and injuring my hand. I added copies of the documents and photos of the settler who wounded me. They put theft and assault on the complaint, but they didn’t put trespassing.

On August 5, 2018 the police informed Yesh Din it had closed the investigation file due to “offender unknown”.
Silence is Golden