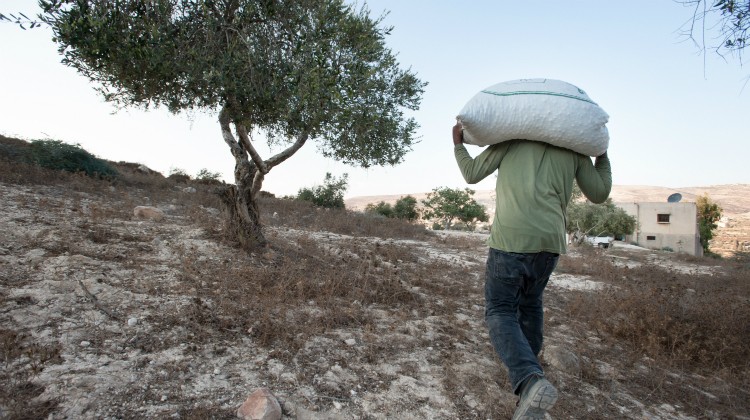 On October 14-16, 2007 we harvested the olives on our land, about 700 dunams of land. The land belongs to my brother-in-law, my sister’s husband, and is about 150 meters from the settler MZ’s house, on the slope under the house. There are olive trees on all of our land, about 120 trees. I lease the land from my brother-in-law. I left the olives that I had harvested in sacks by the tarps and ladders in the grove to save on transportation expenses, and I planned to take everything back home at the end of the harvest.

I returned at the end of the harvest on October 17, 2007 at 6:30 am to the spot I had left everything the night before, and I found nothing. It all disappeared, about ten sacks of olives, about 400 kg of olives disappeared, and about 100 meters of tarp for gathering olives, the ladders and the kitchen utensils we used to make coffee and light meals.

I called Yesh Din and Rabbis for Human Rights and asked them to call the Kedumim Police and I called the Red Cross. That same day, October 17, 2007 I went to the Kedumim Police at 8:30. They admitted me at 9:30, I gave my complaint and received a receipt.

A Druze policeman told me I was a liar. I got angry and said that the government and the police aren’t interested in returning stolen property. If they wanted to, they’d go right over to the settler MZ’s house and catch the thieves and what they stole.

Finally, two policemen I didn’t recognize escorted me to the grove and photographed the tracks on the ground left by the olive sacks being pulled. The tracks led to the house belonging to the settler MZ. I told the officer that across from MZ’s house there’s a military base and they have a lookout where soldiers can observe everything that moves in the village and the area and immediately deploy. So the policemen should go to the lookout and ask the soldiers whether they saw anything, but the policeman refused and only photographed the tracks. There were only two water bottles that had been full the previous night but were now empty. The policeman took the bottles to check for fingerprints.

This isn’t the first time I’ve filed a complaint about olive theft and Yesh Din documented such a case last year. They never found anything and I didn’t get anything back and never heard anything form the police. The police investigator said he’d call me back about my complaint within 24 hours, but I never heard back. I complained to the Palestinian Authority ministry of agriculture and they estimated the damage at ILS 7,000-8,000.

On December 30, 2007, the police informed Yesh Din that the investigation file had been closed due to “offender unknown”.
Silence is Golden