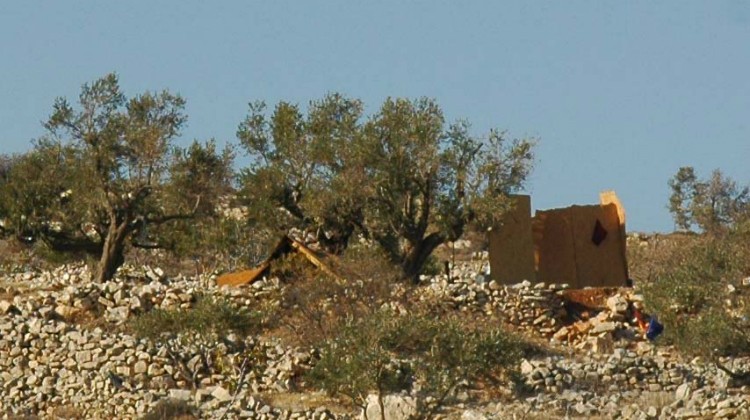 I live in Mikhmas, farming is my livelihood. About ten years ago I leased a plot of land. The land owner is my relative. The plot is about thirty dunams and is about 1.5 km north-west of the village of Mikhmas, on the western side of route 60. The plot has about 400 olive trees on it. For the past ten years, I’ve been tending this plot every day.

Six months ago, settlers invaded the area by this plot and built an outpost with a few temporary structures. It’s called Migron 2. Since then, there have been settlers there constantly. The number of settlers in the outpost changes, sometimes just six and sometimes up to thirty.

Since the invasion, Palestinian herders are harassed there. About a year ago, the settlers sealed a tunnel that was our way to go to our land, the village residents opened it up again and we’ve since gone back to using this route.

On November 3, 2008 in the early morning, my family went to harvest olives. My wife went with three of my sons, I didn’t join them, I stayed in the village, I was busy with other matters.

At around 2:30 pm I heard from people in the village that there were problems on my land between my family and settlers. We went out immediately, me and around ten people from my village. When I got there, there were about four military, police and DCO jeeps. There were about 30 Israeli security forces. I asked my wife and sons what happened, they told me that settlers had attacked them and sprayed tear gas in their faces and in my son MA’s eyes. I saw that the police had detained two settlers, and after the incident and until 4 pm several soldiers stayed on to guard and enable us to finish harvesting.

About ten days before the incident, we began harvesting the trees. November 3, 2008, the day of the incident, was the last day of the harvest, I went to the plot with my mother and two brothers early in the morning. The plot where we worked is 600 meters east of the outpost Migron 2.

We were busy with the harvest, and at around 1 pm about thirty young settlers came from Migron, they were about 18-20 years-old, they were all masked, but unarmed. One of the settlers told me in Arabic: “This is Israeli land, get lost!” I told them I wasn’t leaving until the police arrived. We started to argue, they were speaking Hebrew but it was clear they meant to make us leave.

At one point, some of the settlers grabbed us and tried to push us off our land. I immediately called the local council and told them what was happening. Then the settlers poured our olives and scattered them from the sacks, and we tried to protect our sacks of olives.

One of the settlers, of the two who were later arrested, tried to snap one of our trees with his hands, my brother MA tried to prevent him from harming the trees, and all the settlers circled around him, standing very close. When we came to help MA, the settlers came to us. Then they got more aggressive and threw rocks at us.

One of the settlers had tear gas and he sprayed my brother MA’s face and eyes. Almost all the settlers threw rocks at us. The rocks hit all four of us, but we didn’t get badly hurt.

This went on for an hour and a half, only once an army jeep approached did the settlers leave. We caught two of the settlers, one who tried to snap the tree and another who threw stones, because we wanted to detain them until the police arrived.

Then two security guards from the outpost of Migron arrived; when we saw them coming, we let the two settlers go and they started to go back towards Migron. Then a border police jeep arrived, saw the two setters on their way to Migron and detained them.

Migron’s settlement guard saw the olives scattered all over and told us to gather them back into the sacks, he wanted to get rid of the evidence before the police came. I said we’d wait for the police to come and see things exactly as they are. After that, two police jeeps arrived, they took testimonies, from my, my mother and my brother MA and told us to come to the police station to file a complaint.

Several border policemen stayed to guard us, and we continued harvesting until 4 pm. At 4:30 we went to the Binyamin Police and filed a complaint. At the police station we saw the two settlers who had been arrested. They were handcuffed. At 6 pm when we left the station, they were still there, handcuffed. The policeman at the station gave a summons for additional investigation and told us to bring our deeds to the land.

On Sunday November 9 we all went to the police with the documents, and they said the investigator responsible for this case was not there and that they would contact us. Since then, nothing happened. The police photocopied the deeds before we left the station.

On the morning of the incident, November 3, 2008 I noticed there were a lot of settlers at Migron 2 and down on route 60. We didn’t pay that any attention, we kept on working, I didn’t think it would led to anything.

At around 1:3 pm I saw about thirty settlers coming from the direction of Migron 2. When they were about one hundred meters away, I saw them cover their faces. When they reached us, their faces were all covered. One of the settlers came up to us and told us to leave. We called the police, and told them we weren’t leaving until the police arrived. The settlers started pushing us and went over to the sacks of olives we had harvested and emptied them onto the ground. We tried to stop them.

Down on route 60 an army patrol jeep stopped, and once the settlers saw it had stopped, they started running away. We caught two of the settlers, until the police came. They both took pictures of me with their phones. One of them apparently called the settlement security. My uncle was in the village and called to ask what was going on. I told him we’d caught two settlers, he told me to let them go immediately or we’d get into trouble. We let them go. The rest of the settlers were standing about 50 meters away and throwing rocks at us.

Two armed security guards came up to us. Once the settlers saw them coming, they uncovered their faces. Along with the two guards, there were four unarmed people. The six of them were older, around 30-35, and they stood between us and the settlers, who had stopped throwing rocks. The guards told us to pick up the olives that had been scattered and we refused to.

Some of the settlers started walking back to Migron and some stayed. Ten minutes after the settlement security guards arrived, a delegation of security forces began arriving. Border police, army and police, and after a bit, the DCO, around 20-25 people in all. Once the security forces arrived, the settlers started yelling and cursing us again. Then the police arrested two settlers who cursed us in their presence. One of them was the guy who tried breaking the tree.

The entire incident took place between 1:30-3 pm, several soldiers stayed on to guard us and we continued harvesting until 4 pm. Then we went to file a complaint at the Binyamin Police. At the police station I saw the two settlers who were arrested, handcuffed. An officer helped me wash my face with water, after I washed my face I couldn’t see for a while. The officer said it was a sign it was tear gas.

On Sunday we went to the police station with the deeds, and they told us that the person responsible for the file wasn’t there and that they would contact us.

The State Attorney’s Office served indictments against two suspects. In December 2010, the Jerusalem Magistrates Court convicted both defendants of trespassing, rioting, insulting a public official and assaulting a police officer. In addition, one of the defendants was convicted of simple assault and deliberate damage to property.
Silence is Golden