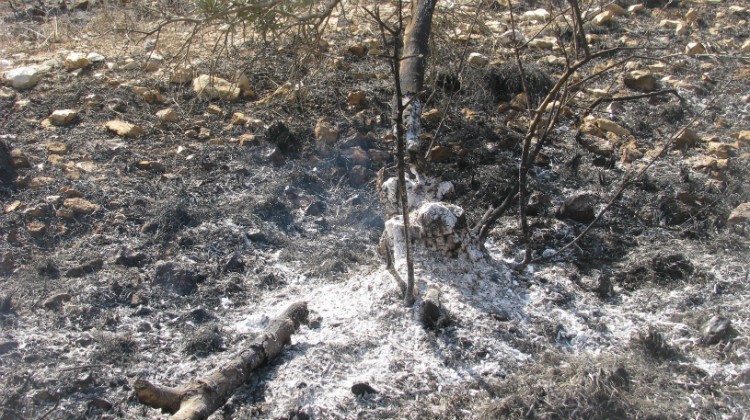 My family owns ten dunams of farmland west of the village Tell, about seven km from the village center. The plot is around 500 meters south-east of the outpost Havat Gilad. There are around three hundred olive trees there, 25-30 years-old. We are required to coordinate with the civil administration before we go to our land. Since 2001, reaching our plot is hard. The settlers harass us, try to drive us away, beat and even shoot.

Two years ago, I had one hundred trees. The settlers cut down most of my trees. I never complained to the Israeli police. I prefer to deal with the local council. Before the intifada broke out, we produced 40-50 containers of [olive] oil. Each container had 17 liters and we sold a container for USD 150. Now I’m only able to produce four containers. We are farmers and we live off our land, settler violence causes huge financial damage. Now, after the big fire I’m left without any trees. All my trees were burned.

On Friday, October 15, 2010 I left the village at 7 am and went to my land. This year there were lots of problems coordinating. Initially, we received a permit for just three days, but after that they decided to make some changes and there was confusion and we didn’t know whether we did or didn’t have coordinated approval for a certain day. That Friday I went to my plot without knowing for certain whether it was coordinated.

Two days earlier, on Wednesday, we were at our land when two settlers showed up in a Toyota truck. I recognized both settlers, they have sidelocks and beards, they’re thin and dark skinned. I don’t know their names, but I could identify them. One of the settlers was armed. On Wednesday there was coordination. The settlers started harassing us, cursing and demanding we leave. The soldiers who were there didn’t intervene. The settlers threatened us that if we didn’t back off, “Just wait and see what we’ll do to you”. Ten minutes later, a settler came with a big dog and he set his dog on us. The settler joked with the soldiers in Hebrew, which I don’t understand, and the soldiers drove us away although we had coordinated a permit for that day.

Like I mentioned, on Friday at 7 am we went back to our land, I went with my family and other farmers from the village to harvest the olives. At around 9 am, the same Toyota truck from two days before appeared with two settlers. Four more settlers and four soldiers walked down from the outpost. They unloaded tires from the truck and set them on fire, right in front of the soldiers. Not only did the soldiers not prevent the settlers from burning the tires, they prevented us from putting out the fire. They started chasing us, driving us away, and therefore preventing any chance of even trying to put out the fire.

On of the farmers called the Palestinian fire brigade, which arrived very quickly from Burin. The soldiers prevented the fire brigade from putting out the fire. We all stood by helplessly watching the fire consume the trees. The farmers estimate that 2,500-3,000 trees were burned. The fire swept across 300 dunams. Border police soldiers stood at the entrance to Havat Gilad and didn’t do a thing. I didn’t see any regular policemen. The DCO sent a vehicle, but the officers didn’t leave the vehicle.

For us, the fire is a calamity and we have nothing now. Nothing is protected from the occupation – they kill people, animals and trees. Every year we suffer from the settlers, but this year has been the worst.

In addition, the settlers stole two donkeys from two farmers in the village.

RR, 51, married and the father of four, Tell

My brother and I own 15 dunam of farmland that we inherited from our father. We had 200-250 olive trees that were over fifty years old.

On Friday October 15, 2010, I was in the village. In the afternoon, I got a phone call from one of the farmers who informed me about a big fire on our land, he said that lots of trees had been burned. In the meantime, KR called me and told me that soldiers were preventing anyone from extinguishing the fire and that fire fighters from Burin had arrived but were not allowed to access the area.

We left, my brother and I, and walked over and reached our land at about 1 pm. It was a terrible sight. Thick smoke covered the entire area, the trees were all burned, and the ground was black. Soldiers and border policemen stood together with the settlers and prevented anyone from reaching the fire. I tried to dodge the soldiers and get around them. So did other farmers and together we tried to put out the fire. It was a huge fire and we couldn’t put it out. All my trees burned down.

Before the intifada, we produced forty containers of oil every year. This year, I have no trees to harvest, and even if the settlers don’t harass us again, it will take ten years to rehabilitate the olive grove. This has caused us huge financial damage.

I live in Tell. I own four dunams of farmland west of Tell, about 5 km from the village center, south-west of Havat Gilad, around 500 meters from it. I inherited this land from my father. There are 60 olive trees on it, about 50 years old. Since the beginning of the intifada in 2001, we are prohibited from going to our land without coordinating with the army and the civil administration. Usually we are allowed to go once a year, for a day or two during the olive harvesting season.

On the day of the fire, October 15, 2010, I wasn’t in the country, but farmers from the village notified my sons who live in the village about the fire on our land. All sixty trees on my land were burned down.

On October 26, 2010 at 11 am I went to the Huwarah DCO accompanied by Yesh Din to file a complaint. I want to note that it took three hours, and while I was at the DCO I was humiliated by a police officer. Filing the complaint took about half an hour, but I had to wait for two hours for a receipt.

I live in Far’ata, I own 14 dunams that have 150 olive trees by Havat Gilad, east of our village. The trees in the plot by Havat Gilad are over 45 years old, older than I am.

On October 15, 2010 at about 11 am, a guy from Far’ata called me and said he saw a fire burning on our land. IS and I went over to put out the fire. We saw fire and one of the settlers setting fire to branches. I didn’t see how he was doing it, but he went from tree to tree and smoke started coming up from the trees. There were also soldiers with weapons but they didn’t try to catch the settlers. Someone called the fire brigade from Azzun, but when the fire truck arrived, the army and the police didn’t let it enter the area. In the meantime, the olive groves burned. It was only an hour later that the fire truck was allowed to enter, but there wasn’t anything left to do by that time, and the fire truck couldn’t handle the terrain. We stood around watching our groves burn, but we weren’t allowed to go to our land. Most of the land belongs to people from Tell, about one hundred dunams.

On Friday October 15, 2010 at 10 am, ST called me, he lives in Far’ata and was harvesting olives far from Havat Gilad. He informed me of smoke coming from the direction of my land, the same area where olives were stolen on October 10. I walked over with ST and AS from Far’ata. There was a lot of smoke. It was a very hot day and there many fires around Tell and Far’ata.

We got to the area of the fire. We saw a settler and four soldiers, who pretended to pursue him. They could have caught him but they didn’t, and the settler kept torching trees, I think with a lighter. Because it was so hot and because the soil had not been plowed, there were a lot of dry weeds and everything catches fire very quickly.

I called the police, the DCO and the fire brigade in Azzun. A fire truck arrived at about 11:30. It wasn’t allowed to go over to the fire for about an hour, until 12:30, and then the police and the DCO arrived. All that time, the settler kept walking from tree to tree setting fires, and we sat on the ground and weren’t allowed near to put out the fires manually. AS told one of the soldiers to catch the settler, to prevent him from setting fire to more trees, and the soldier said to him: “Shut up or I’ll make you leave.”

Once the fire fighters finally got to the fire, it was too late. The fire had burned down the trees, in total about 1,500 olive trees. Fifty more settlers arrived, and the army allegedly guarded them.

On March 17, 2011, the police closed the investigation file due to “offender unknown”.
Silence is Golden