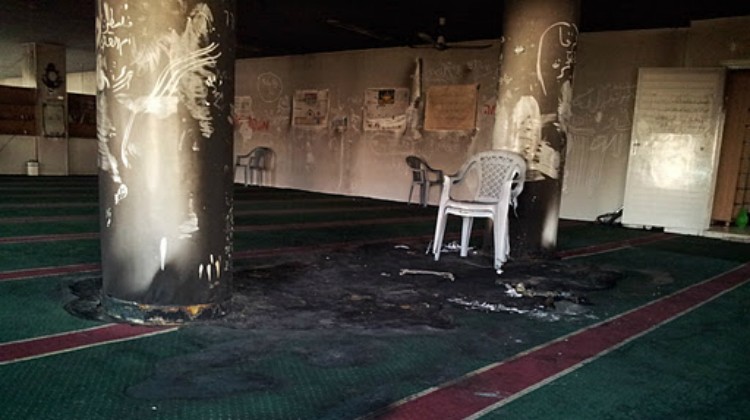 I’ve served as the head of the council in Burqah since 2000. The village is seven km east of Ramallah and has about 3,000 residents. We are surrounded by several settlements and outposts. To the west: Givat Assaf is one km away, and Psagot; south: Kochav Ya’akov is four km away; in the east – Migron is two km away. We’re completely surrounded.

Since 2000 the village residents have suffered from recurring attacks by the settlers of Migron and Givat Assaf. Farmers are attacked. Herders are prevented from herding their flocks. Horses and donkeys were stolen. Olive trees are burned. They come into our village and torch cars. There was also an attempt to burn a house. We filed complaints to the Israeli police in all these incidents [some with the assistance of Yesh Din] and nothing happened.

On the north-west side of the village there’s a mosque called al-Nur, it was built in 2004. This is a three-story building. On the first floor, there’s a school and a restroom. The mosque is on the two upper floors – the second and third floors.

On Thursday December 15, 2011 at around 5:30 am I was at home. People from the village called me and told me there was a fire in the mosque. I left immediately and when I got to the mosque, I could see a lot of smoke on the third floor, and a lot of people trying to control the fire and put it out. I called the governor of Ramallah, the ministry of religious affairs and the Palestinian DCO and informed them about what had happened.

A little before 6 am we managed to control the fire. At around 11 am, the Israeli army and police arrived, but they weren’t able to enter the mosque because of the young people’s spontaneous protests.

Most of the damage is on the third floor. The carpets were burned, the walls were blackened and offensive slogans such as “War – Mitzpe Yizhar” sprayed on the walls.

That same day at around 2:30 pm, I went with the muezzin to the [Israeli] police in Beit El and the muezzin gave his testimony. We weren’t given any receipts for the complaint.

I live one km away from the mosque. I left my house at around 4:45 am, early in the morning to go to the mosque. At 4:55 am I got to the mosque. I’m the first and last one there, because I’m responsible for the mosque [and the muezzin].

I went in through the front door on the first floor. When I opened the door, I smelled strong smoke. I went up to the second floor and it got stronger. I walked around and then went up through the door to the third floor and I saw that the mosque carpets were on fire. Because it was time for morning prayers, a lot of people arrived and tried to put out the fire. The thick smoke was suffocating because the windows were closed. We opened the windows and for about half and hour we tried to put out the fire, of course there was no electricity, it was completely dark and the plastic chairs melted and gave off a suffocating smell.

We never imagined anything like this could happen, so we never introduced any protection mechanisms. The side door was unlocked. When the sun came up, we saw that most of the carpet had burned, the electricity system was damaged, and they had sprayed “War – Mitzpe Yizhar” in Hebrew on the wall. The walls are covered in soot. A lot of media arrived, as well as representatives of the Palestinian Authority. At 2:30 pm, I accompanied the head of council to the Israeli police in Beit El and gave testimony.

On July 11, 2013, a year and a half after the mosque was torched and the offensive slogans sprayed, the police informed Yesh Din that it had closed the investigation file due to “offender unknown”.
Silence is Golden