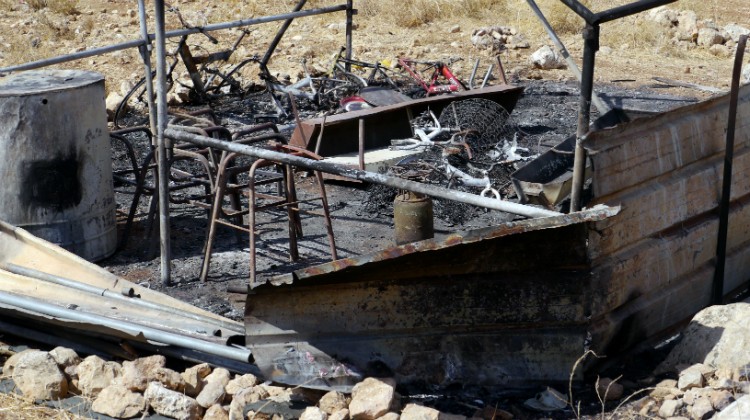 Yussef Ka’abaneh, 53, married and the father of eight, ‘Ein Samia

I’m a Bedouin from the Ka’abneh tribe, I have five sons and three daughters. My family and I have lived in ‘Ein Samia for 15 years, it’s in the jurisdiction of Kafr Malik. Usually we live on the west side of Kfar Malik during the winter, and east of route 458 – about 200 meters from the road – in the summer. I own about 15 sheep and goats. I don’t own any land, but I work temporary jobs farming.

South of our area, about two km away is the settlement Kochav Hashachar. We’ve had many “Price Tag” incidents during the past few years as well as other harassment directed at Bedouin people who live here, including attacking herders, burning wheat fields, throwing rocks at Palestinian cars, spraying graffiti slogans and more. This is the first time I’ve experienced a torching, but four years ago I was attacked by about ten armed settlers who got out of a minibus while I was herding my flock and who threatened me with their weapons. They stole one of my goats and left.

On August 13, 2015 at around 5:30 am my cousin called me, he lives in ‘Ein Samia, and he told me that my tent was burning. My family and I weren’t in our tent but staying with relatives. I immediately went over to my tent and saw military and police forces. They didn’t let me go over at first, only half an hour later and then they took my testimony.

The tent burned down completely, with all our belongings: mattresses, blankets, small water tank, a gas stove and a gas tank, carpets, pillows, as well as food: lentils, rice, wheat. It was all burned. In addition, they sprayed offensive slogans: Star of David, revenge. That’s how we knew they were settlers.

The army and the police left after taking my phone number. A week later, the Binyamin Police called me and asked me to come and complete the complaint and that’s what I did. I received a copy of it, but I don’t have it now. The police said that “hilltop youth” from Kochav Hashachar had done it for sure.

That same night, settlers tried to attack other tents in the area, but the residents woke up and drove them away. They only managed to spray slogans.

The Jerusalem District Attorney’s Office served indictments against two settlers who are minors for arson, conspiring to commit a crime and threats based on racist motives. In 2017, the juvenile court convicted the accused and sentenced them to prison service, probation and compensation of the victims.
Silence is Golden