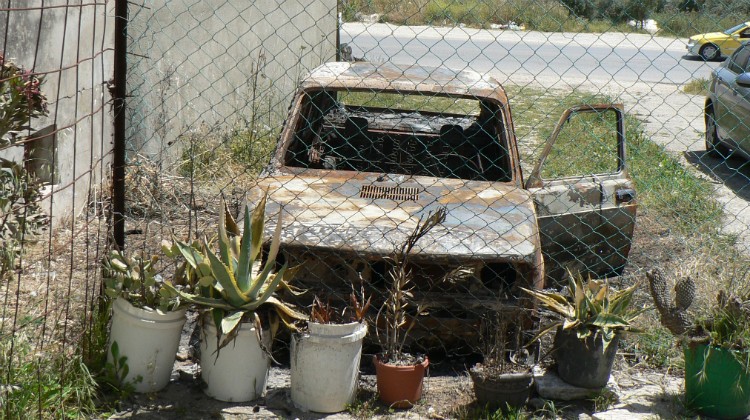 I own an auto repair shop in Huwarah. Our village has suffered from settler harassment for years. My shop and my house are both on the main road, route 60, about 15 meters from the road. The house is about one km west of Yizhar and we constantly have problems with settlers from Yizhar. The come down to the main road, attack us and beat us. Two weeks ago, on Friday April 2, 2010, settlers attacked me. I don’t have a special parking space and so I usually park my car outside my house.

On April 14, 2010 at around 3 am, I got a phone call from my neighbor NA, who informed me that my car was on fire. My neighbor’s house is very close to where the car is parked. I left my house and saw my car was on fire. The car is a yellow 1979 Fiat. The fire was very large because the fuel tank exploded, and we couldn’t put the fire out. My car was completely burned. The tires were burned too. All the windows were shattered, probably from the explosion. The car was for my own use.

When I saw the car burning, the neighbors and I tried to put out the fire, but we couldn’t control it. Half an hour later, the fire brigade arrived from Burin. When they arrived, the car was completely burned. They managed to extinguish the fire, but the car was completely burned. The neighbor who discovered the fire saw people running from the road, but it was dark and hard to identify them. In the morning, I called the Palestinian police. They arrived and saw the car, photographed it, took my testimony and said they would inform the Palestinian DCO. The car is worth ILS 10,000 and it can’t be repaired.

My daughter woke up crying, that’s why I woke up. And then I saw the big fire. The gas tank exploded and made a loud noise. I called my friend HO, to inform him that his car was on fire, and he woke up and went over to see what was happening. This isn’t new. They keep hurting us. A while ago, they punctured all four of my tires.

On July 11, 2013, over three years after the vehicle was torched, the police informed Yesh Din that it had closed the investigation file due to “offender unknown”.
Silence is Golden