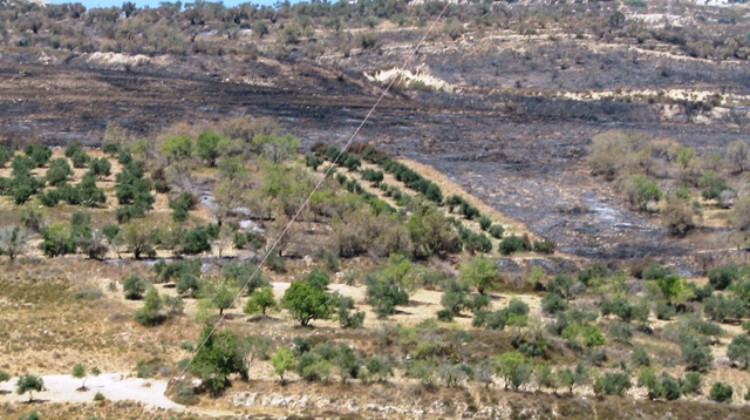 I’m a farmer by trade. Part of my land is near Havat Gilad. For a long time, the settlers who live there have been harassing me. The people living in the outpost Shvut Ami have also harassed me [Yesh Din documented at least four previous incidents]. My land is north-east of the village of Immatin, about two km from the village. The plot is nine dunams and has olive trees and I grow seasonal crops between the olives.

On May 20, 2008, Tuesday, at 10 am I was on my plot when a masked man appeared riding a red horse. He came from the direction of Havat Gilad. He was holding a utility knife about 25 cm long. I was with my wife, my daughter-in-law and our grandchildren. The masked man said to me “Go away”, and I replied, “You go away, this is my land.” The settler urged the horse by kicking its hindquarters and then also tried dismounting from the horse to attack my sheep (nine sheep). My wife and I tried to defend ourselves and the sheep using a pipe we had. He was frightened and ran away, he got about 60 meters back and then repeated, “You don’t want to get out of here?” I replied, “No.” He held the knife in his teeth and took a large rock out of his pocket. He threw the rock at me but missed. The children, aged 1.5 and 4 got very frightened. He ran away, I chased him for about 70 meters. He stayed about 200 meters away, I could see him.  At that point, I saw three settlers walking down. There were two other herders from our village, I called to them and they joined me. When the settlers saw that others had arrived, they left. I called S from the Israeli DCO in Qalqiliyah but there was no response. The next day I returned to work with no problems.

On May 22, 2008 we went to the plot again. It was the wheat harvest. We arrived at 6:30 am. I was with my wife S and my son R. When we got close, I could see that the wheat was scorched. I got very upset and fainted. This is the work of an entire season. I called S at the DCO in Qalqiliyah , I called his personal number and he didn’t answer. I called the police, they didn’t answer. My son had the number for Kedumim Police and I called it. They asked us to come to them. I walked 4-5 km and got to the police station at about 8:30 am. I waited around an hour and a half outside and then an officer with three stars came out and said there were no investigators today, and that I should come the next day, meaning Friday and then Saturday. So he told me to go home. I got upset and said, “Why do you treat people like this and then tell them there aren’t any investigators?”

I called Yesh Din and they told me to stay at the station and they would call a police officer named R. A police officer passed and asked me, “What are you doing?” I said I wanted to file a complaint because my crops were burned down. He said, “How do you know settlers did that?” I replied, “Are you kidding me? Who else would dare go there except settlers?” He told me to get in the car (I was outside the station) and took me into the station. I waited for another hour and then went to his office. He said, “I haven’t forgotten, but we’re still busy.” He turned to an investigator named AL and he took my testimony. The officer who brought me in was the translator. They had me sign some paperwork and then told me to wait outside. I waited for half an hour, went back in and asked why I was waiting. They said they were coordinating an army escort to the site of the incident. I drove there with two police officers and four soldiers. We drove in a police car and a white DCO vehicle. We got to the field and they photographed it and saw the remains of the torching. They also burned the bundles of wheat I gathered after the harvest. They also burned nine olive trees that yield about 200 kgs of olive. I produce about half a ton of flour from the wheat, and about one hundred sacks of feed for the sheep.

They asked whether I could identify the settler. I said he was masked but the horse was red.

On November 6, 2008, the police informed Yesh Din that the investigation file had been closed due to “offender unknown”.
Silence is Golden