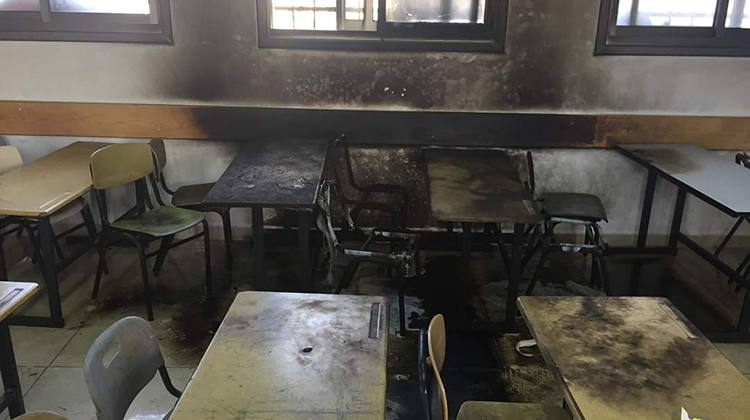 I am a resident of Urif. My house is near the entrance to the village, by the Palestinian police. I live there with my wife and children. I have two sons and three daughters. The eldest is 18 and the youngest is a year and three months old.

I’ve worked as the custodian of the school in Einabus for eight years. I personally don’t suffer from settler violence because my house is quite far from the settlements. Since 2000, soldiers came into my home twice. They searched it but didn’t make any arrests and they didn’t confiscate property or money.

On Tuesday, January 28, 2020, I arrived at the school building at 6:45 am. When I opened the main gate, I noticed some smoke and thought there might be a fire inside the school building. The closer I got, the stronger the smell of smoke was. I checked and saw that the power was off for the entire building. For safety reasons, I shut off the electricity every day after school ends before locking up for the night so I knew the smoke wasn’t caused by an electrical problem.

When I entered the building, I discovered the smoke came from the fifth grade classroom. When I opened the door to this classroom, there was a strong burning smell and thick black smoke. I noticed that one of the windows was open and apparently that’s how they started the fire inside the classroom.

Outside, they sprayed a slogan in Hebrew on the northern side of the building. I didn’t know exactly what it said, but I knew settlers did it.

The principal and the Palestinian police arrived at 7:15. They went into the classroom that had been torched, took photos and documented the scene. At the same time, around 7:15, students began arriving. There was a commotion, and the children were in shock. They were used to stone throwing, but this was the first time their classroom was torched. The children were afraid that settlers would come to school while they were there.

At about 8 am, school began. The students from the class that had been torched were moved to another room and started their day there. Photographers began arriving, along with media and human rights organizations representatives. I don’t know whether the Israeli media came too. The classroom was full of smoke and soot and charred electrical wires. We’ll need to renovate it.

The Israeli DCO contacted the head of the council and told him they’d come to the scene. I waited for them at school until 3 pm. Nobody came. I went back to my house in Urif. At 4:30, the head of Einabus council called me and told me to come quickly to the school because the army arrived and were waiting outside and wanted me to come unlock the building so they could take photos and document what had happened. I took a taxi to the school right away. There were a lot of soldiers there, over 30, and police officers. I unlocked the gate for them. They went into all the classrooms and asked me to switch on the electricity main circuit breaker.

After I unlocked the school for them, four officers in plainclothes took me into a room, one spoke Arabic and the rest spoke Hebrew, they closed the door and took my testimony. I told them what I’m telling you now. They told me, “You’re the first person to reach the scene so we want to take your testimony.”

This incident surprised me. It’s a school. There were several price tag incidents in Urif lately, so on one hand, I’m not surprised; on the other hand, this is a school for children.

Taleb Hammad, 57, married and the father of eight, Einabus

My house is in the southern neighborhood, I live there with my wife and children. I have six sons and two daughters. The eldest son is 32 and the youngest is 12. I have 13 grandchildren. For the past three years, I’ve been volunteering as head of council in Einabus. Before that, I was a construction worker and then a contractor in Israel – since I was 16 and until I turned 50.

Two years ago, my son who works with me got a job paving an agricultural road on Einabus land in Area B. He started working and more than 30 settlers arrived from the direction of Yitzhar, threw rocks at him, broke the glass of the backhoe loader, slashed its tires with knives and cut the backhoe loader’s electrical wires.

The army also harasses us. They come, enter our home in the middle of the night and tell us they’ve come to search for weapons. They’ve entered our home over 15 times since 2006.

I am the head of the council and so I am aware of all the incidents. There’s an incident nearly every week. We’ve gotten so used to it that people no longer report every incident. We’re sick of complaining and filing complaints.

During the past four or five years there have been several price tag incidents here in Einabus. There are periods of quiet and then times when the number of incidents increases to two or three in a single month.

The settlers have access to our village from several directions and we can’t defend the village. I can’t post guards around the children’s school because it’s too close to the settlement Yitzhar. It’s too dangerous. It’s very risky for a Palestinian to be in that area because of its proximity to the settlement.

Soldiers could easily shoot a Palestinian who is in that area on the grounds of suspecting the Palestinian was coming to attack them and their settlement. It prevents us from being able to protect our children, our village and ourselves.

On Tuesday January 28, 2020, I was in my home in the village. The school custodian called me at 7:30 am and reported that one of the classrooms in the school had been torched and a slogan in Hebrew sprayed on the exterior wall on the north side of the building.

When I arrived, I saw that several desks had been burned, as well as about four chairs. The floor was also charred. Electrical wires were also damaged by the fire and there was black soot in the classroom. It was a classroom for about 30 children, 11 year old children in the fifth grade.

By the time I arrived, the fire was out but there was a lot of smoke inside the classroom. Outside the classroom, on the north wall, there was graffiti: “demolish only enemies’ houses”, and “regards from Kumi Ori [outpost]” as well as a star of David.

I reported this to the Palestinian DCO and they contacted the Israeli DCO. Between 9:30 – 10 am I got a call from the Israeli DCO. They spoke to me in Arabic and Hebrew. They asked me what happened at school, and I reported the events. They said they would send forces at noon. After that they called again and said they would come at 1. They called me four or five more times, finally several army jeeps came to the school at 3 pm. During the last call with the Israeli DCO, they asked me to wait for the soldiers at the main entrance to Einabus. I waited there from 2 pm like I was asked.

At 3 pm, children from the village came to report that soldiers were already inside the village. I went right to the school and met the soldiers there. It was important to me to be there and prevent altercations between the children and the soldiers. The soldiers parked their vehicles and jeeps below and walked up to the school building. There were over 20 soldiers, including three or four police officers. I heard the officers introduce themselves as the Samaria and Judea Police investigation and intelligence unit.

They went inside the school and stayed there for about an hour to an hour and a half. I stayed there with them. They took photos, took the school custodian’s testimony, he was the first to witness the scene. At the end he signed the testimony he gave them. He was afraid to sign his name, but I convinced him and he did. He can’t read Hebrew so he couldn’t know what he was signing. They didn’t read him what they wrote on his behalf and didn’t translate for him. After they had him sign the testimony, they got into their vehicles and drove off. They didn’t take my testimony.

On November 4, 2020, the police informed Yesh Din it had closed the investigation file due to “offender unknown”.
Silence is Golden