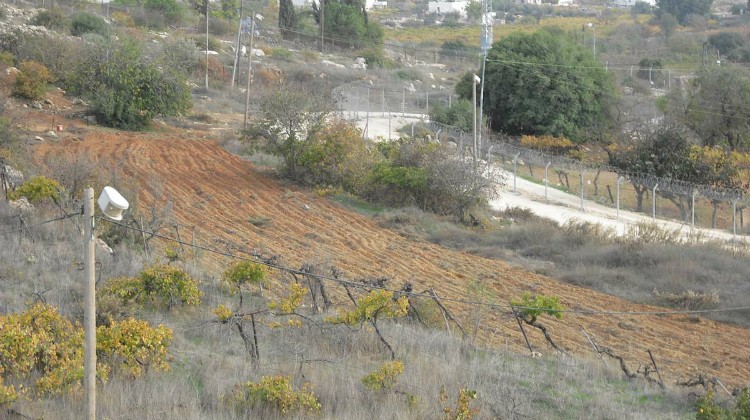 They stole our land when they expanded the settlement Giv’at Haharsinah. During the last expansion in 2003-2004, they stole seven dunams of our land, in addition to the twenty dunams annexed in the past for the settlement fence. The army and the settlers prevent us from accessing our land. The last fence was put up “for security reasons” and the civil administration determined that the settlers aren’t allowed to use the land but in practice the settlers try to take advantage of our land and damage the trees: we have grapevine, pomegranate, fig, almond and pistachio trees. The settlers set up henhouses on our land, brought their donkeys and the such. Besides using our land, the settlers also broke branches off trees, knocked down the grapevine covered shack and about two years ago, they torched part of our land.

On November 15, 2008, at 8:30 pm we heard tractors and heavy machinery working on our plot and on our neighbors’ plot – the A family. I went up to the roof to check what was happening, and I saw a settler plowing with a tractor whose lights were off. The person continued plowing and at around 9:15 pm, the police came. I don’t know who called the police. The settler turned off the tractor engine, got off and walked north, towards the settlement, on the path between the land and the settlement.

The police saw the settler plowing. I asked the policeman why he didn’t do anything. He dodged the question and said if I threw rocks at him, I’d be arrested, and if I wanted to I could file a complaint at the police station. Other settlers who were there stayed for another hour-hour and a quarter.

The man who plowed my land is a settler named Y, he put up a mobile home on our land, brought goats and chickens.

Later, an army jeep arrived with the settlement security vehicle, with A, the settlement civilian security coordinator. Settlers stood by the fence and continued cursing. After that, the army and police jeeps left he area, and one of the soldiers turned to the settler Y and said, “Fuck him”, meaning me. The next day, I went to file a complaint at the police. I got there at 7:30 am, I entered at 9:30 am but only at 2:30 did they take my testimony. It took 15 minutes. Initially I saw the investigator was the son of a settler from Kiyrat Arba named A, who is also connected to taking over my land. He yelled at me and told me he wouldn’t assist me without the deeds. I asked for a different investigator. The second investigator gave me a receipt for filing a complaint but didn’t sign it.

On August 5, 2009, the police closed the investigation file due to “lack of evidence”.
Silence is Golden