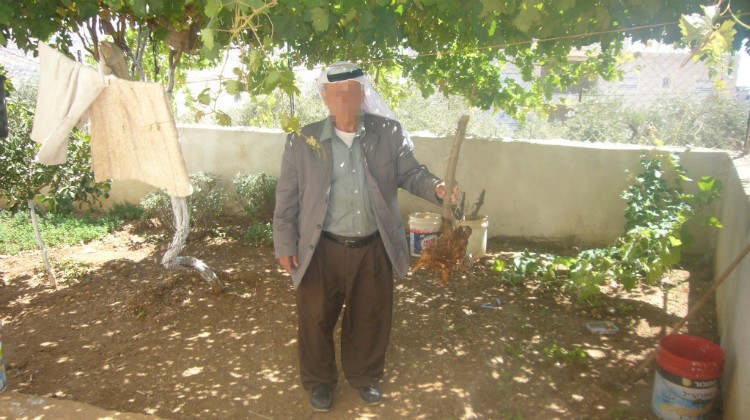 Deir Dobwan is a town with 12,000 residents. Its residents make their living mainly from farming, herding and from support sent by residents who left and now live in the US. The settlements Ma’ale Mikhmas and the outpost Migron were built on the village’s land.

I own a plot of approximately 12 dunams, which is divided by route 60 so that part of the plot is east of the road, and part is west of it. I have about three hundred olive trees, planted in 1998. In 2004, the settlers damaged a lot of the trees, but since then the trees have recovered and grown back.

On Saturday August 6, 2011 I went to my plot with my son, as we do every Saturday to tend to the olive trees and the soil. As we were walking down to the plot, I noticed the damage to the olive grove. When we got there, we saw that around one hundred olive trees were uprooted or broken. We had serious damage. I immediately went to the Palestinian police in Ramallah and filed a complaint. The police asked me to report the damage to the Palestinian ministry of agriculture.

The next day, Palestinian media came to my land and filmed the damage. On August 10, 2011 representatives from the Palestinian ministry of agriculture came and offered to try and minimize the damage by treating the trees that had been damaged. Because it is necessary to treat such damage immediately, we did and we didn’t wait for the Israeli police. Initially we were reluctant to file a complaint with the Israeli police, but finally on August 11, 2011 we filed a complaint at the Sha’ar Binyamin station.

On September 25, 2011 the police informed Yesh Din that it had closed the investigation file due to “offender unknown”.
Silence is Golden