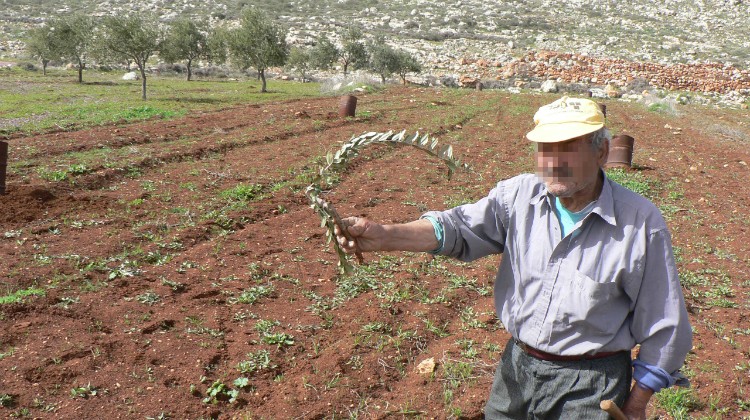 I live in Qusrah, I’m a farmer. I own 30 dunams of farmland, land that my grandfather bought from farmers from Duma over one hundred years ago. The land is about two km west of the center of Duma, and two km south-east of the village Qusrah, where I live. A mountain range separates Qusrah from my land. Over the years, many settler outposts were built on the mountain range, and they prevent us from freely accessing the large part of farmland that belongs to the farmers of Qusrah.

I usually go to my land every day except Friday. I used to plant season crops, such as wheat. On Friday, February 18, 2001 I had 270 olive saplings I had bought in order to plant on my land. My six sons and I went to plant the olive trees right after prayers. We stayed until dark, completed the planting and returned to the village.

On Saturday morning at 7 am, I went to my land by myself and everything looked fine. I continued working. I noticed two settlers standing up on the mountain top, I couldn’t identify them. Recently there are a lot of settlers here because they set up a shipping container and put up new tents, I think they call it the outpost Eli Ayin. The settlers had their sheep with them and didn’t approach me. I stayed there until about 5 pm and then went back to the village. I returned on Sunday, February 20, 2011 and discovered that all the saplings had been uprooted and stolen. Around me I saw they had also chopped down large olive trees on the next plot that belongs to my neighbor. I was shocked.

I went back to the village incredibly angry and informed the village council in Duma. They contacted the Palestinian DCO, who transferred the complaint to the Israeli DCO. The council informed me that the Israeli DCO wanted to meet me on my land. On Monday afternoon, two Israeli DCO jeeps arrived with soldiers. They took pictures of the damage and took my testimony. There weren’t any police officers with them.

On Wednesday, February 23, 2011 I went to the Binymin Police station with my son and filed a complaint. About a month ago, they damaged a well I dug and destroyed it, apparently it was also the settlers from Eli Ayin. I complained about that incident yesterday to the police as well.

On March 28, 2011 the police closed the investigation file due to “offender unknown”.
Silence is Golden