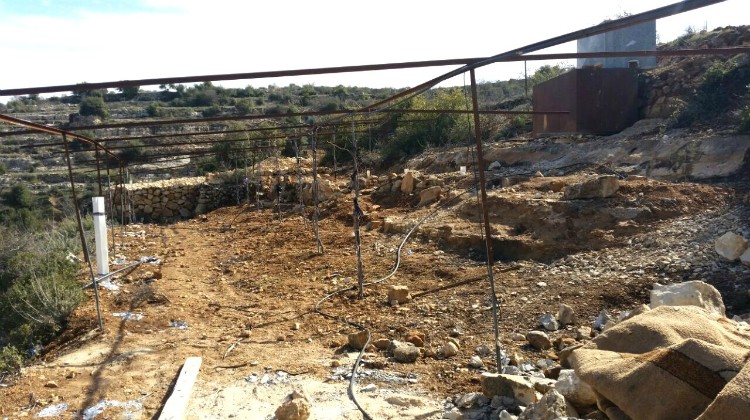 I live in al-Khader. I have a metal working business. The family owns 33 dunams of land that we inherited from our grandfather. The plot is about 2 km west of al-Khader and 200 meters south of the outpost Sde Boaz (Neve Daniel North) and one kilometer north of the settlement Neve Daniel. This farmland has been cultivated for years and is surrounded by stone walls. There are several trees and grapevines, which were planted previously. There’s also a stone structure on the plot, which served as a storehouse and shelter. Although the plot is in a problem area in terms of settler violence, we never suffered from the settlers before. There’s no need for early coordination to access the plot and work there.

At the beginning of January 2017, my brothers and I began to restore this plot. We planted olive trees and other trees and planted grapevines. Some of the olive saplings were four years old and older when we planted them. On January 26, I worked on the plot until the evening. On the morning of January 27,I arrived at my plot at 10:00 am. I saw that during the night, settlers had damaged everything we had planted, uprooting and stealing about 300 grapevine plants and 100 olive saplings, damaged the fence that I built around the plot in 2016 and destroyed part of the structure that served as a storehouse.

As soon as I saw that, I called the Palestinian DCO. The Palestinian DCO called the Israeli DCO. I got a call from the Israeli DCO and within fifteen minutes the Israeli DCO and police arrived. They photographed the damage and took my testimony. I was told to go to the police station and file a complaint. On January 29 in the morning, I went to the police station in Beitar Illit and filed a complaint. I estimate the damage to be ILS 15,000. On the road and by the surrounding settlements there are cameras, examining their footage could help identify the people who did the damage. A man named A’ owns a plot near ours, and his plot was harmed too, they damaged and cut down about 400 trees.

On April 30, 2017 the police informed Yesh Din that the investigation file was closed due to “perpetrator unknown”.
Silence is Golden