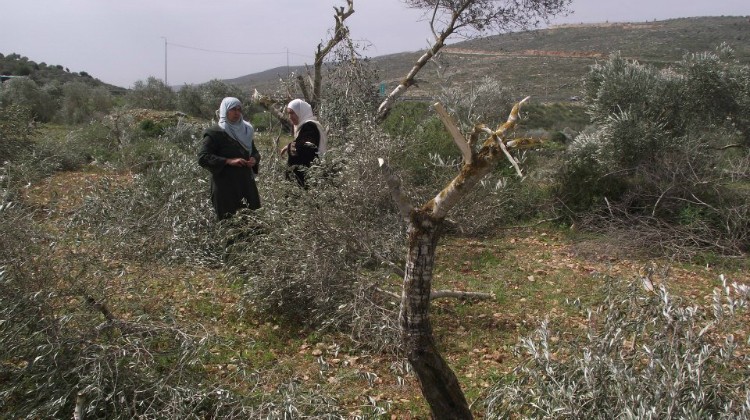 I’m an only son, I inherited ten dunams of land from my father. I have about 110 olive trees on my plot, about 30 fig trees, about 40 almond trees and about 12 grape vines. My land is approximately two km north of the village, at the top of the mountain. About 300 meters north of my land is the settlement Rehelim. The settlement’s security perimeter road separates my land from Rehelim. The settlement’s sewage has flowed down on to my land over the past seven years. During this period, many peace activists came, documented the pollution and promised to help, but the sewage flow continues. Over 20 olive trees were damaged, along with ten almond trees, 15 fig trees and ten grapevines. Two years ago, I filed a complaint at Huwarah DCO about the sewage. They sent me to Beit El and said they dealt with this type of issue. I went there and that day they weren’t working. I didn’t go again.

Five years ago, I went to plow our plot with my wife and children. Two armed settlers came down from the direction of Rehelim towards us. They stopped 200 meters away and shouted: “Go away!” We hid among the rocks. One of the settlers fired a round of ammunition at us. We fled. While we were running, we heard yelling. When we got back to the village, we heard that the settlers had attacked a woman and a girl from our village. The woman, KA, was working with her daughter in a plot she owns, just by my plot. The settlers attacked them, beat and kicked them.

[The incident which is the subject of the complaint:] On March 13, 2006, the landowners from A-Sawiyah who own land by Rehelim went to plow their land, in coordination with the DCO. I didn’t go that day, my sons went to plow our plot. At 8:30 a DCO officer HH and seven or eight soldiers arrived. Israeli peace activists came too. When my son, A reached our land, he saw the soil was dug up and that there were tractor tracks leading to a pit where an olive tree had been uprooted and stolen. Judging by the tracks, the tree was uprooted two days before. My son called the DCO officer and showed him the pit and the tracks. The officer came over and documented the pit on camera. He told my son he would meet me at the plot the next morning. The following morning at 8:30 I met the officer on my land, I showed him the pit where the tree had been uprooted and also the sewage flowing onto my land and the trees damaged as a result. The officer asked me to accompany him and file a complaint. He promised to assist me in this matter.

About one week later, I don’t recall the exact date, a herder from my village, MA, herded his flock close to my plot. MA has land adjacent to mine, and he knows my land very well. While he was herding, MA saw settlers on my plot uprooting olive trees and loading them onto a tractor. I’m prevented from going to my land without prior coordination, so I couldn’t come and check what exactly happened. Only yesterday, while filing the complaint, we went to my land again.

On March 29, 2007 the police informed Yesh Din the investigation file was closed due to “offender unknown”.
Silence is Golden