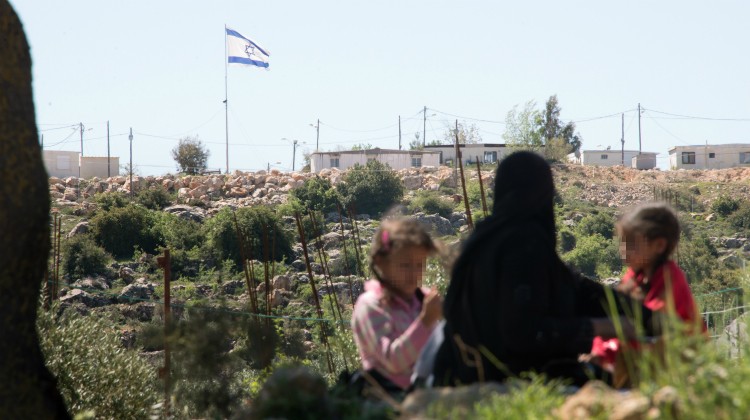 I own about 12 dunams of land, I grow mainly wheat and barley. It is located west of the outpost [Sde Boaz] that was put up close to our land by a settler whose name I think is H, at the end of 2001. In February 2004, I planted olive trees on half of my land, my children helped me. I planted the olive trees although I – and others – are aware of that settler’s harassment. Because I was aware that he might uproot them, I checked on the plot and the trees every day. Around mid-February 2004, my family and I went to check on the grove again and discovered that all 150-200 saplings we planted had been uprooted and taken away. At the time, I did not file a complaint.

I didn’t come to terms with the theft and decided to plow my land and farm it. I took the mule and plow and rode to the plot to do some plowing. I recall it was a Saturday. My wife and son accompanied me. At approximately noon a group of settlers arrived. Around 20 people from H’s outpost. All young men, 20-25 years old. They didn’t look orthodox, they weren’t wearing kippahs. One of them came up to us. He was a dark-skinned young man, tall and beardless. He asked me in Arabic what we were doing there. I replied that I was plowing my land and he said I wasn’t allowed to. I asked him why, and he said I needed a permit. I said it was my land and I didn’t need a permit to farm my land. He spoke to me in very good Arabic. He had a camera and he photographed me. Then he said, “Leave right now or I’ll have to use force.” Since they were quite a few of them I saw no point insisting and decided to leave with my wife and son.

There is a shack on the plot, built by my family back in the days of Turkish rule. This is a shack that we use for resting and storing our tools. The settlers installed a gate over the door and locked us out. To this day they prevent us from entering this shack on my land. The settlers also often walk around with their dogs. I saw about 17 dogs, and when they see a villager, they set their dogs on us.

During March 2005, the residents of al-Khader who are harmed by the outposts around Neve Daniel met with an officer from the Palestinian DCO [District Coordination Office], who suggested we file a complaint with the Israeli police. On March 31, 2005, I went with a group of people to file a complaint at the Kfar Etzion Police in the Hebron Precinct. I don’t have record of the complaint.

After we filed the complaint, we got called by the police, and everyone who filed complaints was summoned, we got called in one at a time to the police and they explained we were forbidden from going to our land and farming it until the police investigation was concluded. This repeated itself three times over the period of a month or two. Except for the summons, we never heard from the police. From that day on, I think it was February 15, 2004, I didn’t return to farm my land because I don’t want to humiliate myself and I’m afraid of the settler, his friends and the dogs.

On April 4, 2006 the police informed Yesh Din it closed the investigation file on the grounds of “offender unknown”.
Silence is Golden