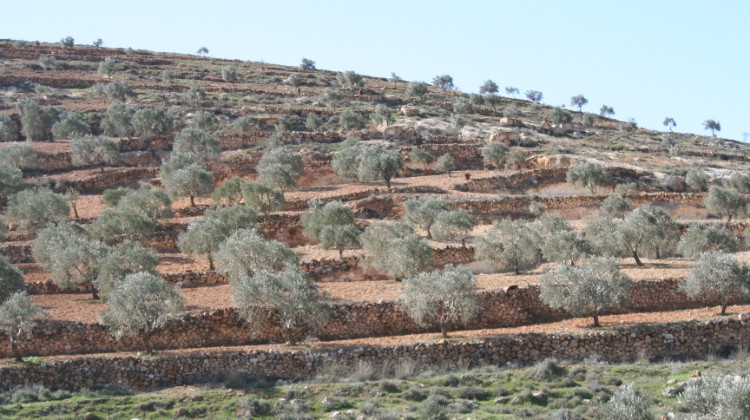 I farm for my uncle Ratib Na’san, his land is five km west of al-Mughayir and three km from the outpost built five years ago by Shilo. There are mostly olive trees, and a few fig trees on his plot.

On Thursday, December 10, 2009 I was working on the plot. On Sunday December 13, 2009 when I came to work around 8:30 am, I saw that olive trees had been uprooted. I went there with a group of workers from the village and human rights activists, including Rabbi Arik Ascherman from Rabbis for Human Rights, who documented the site of the uprooted trees. We went to plant olive trees on the plot where olive trees were previously uprooted.

When we saw the destruction, we assessed the damage. Some of the trees were uprooted but were left there, and others were stolen. We counted about 270 trees that had been uprooted. we couldn’t replant the uprooted trees that were left behind because they had dried out. We planted the new 180 saplings in that same area, and not on the plot where we had planned to.

My uncle JN called the police at around noon. The police with the people from the civil administration came at about 1-1:30 pm. The police took photos and they took my testimony.

The officer gave me his phone number and told me that I should call him if I need anything, and that if he wasn’t available, someone else would help me.

On the day of the incident I was in Ramallah, and my nephew called me and told me that when he reached the plot, he saw major uprooting of trees. I told me that they had called the police and the civil administration, and that they had come and counted the uprooted trees with my nephew. He said that the policeman also photographed the uprooted trees but kept the photos. Then next day, I went to the plot and saw the destruction as well as the new saplings they planted.

This is the 18th time I’ve filed a complaint about damage to my trees. I own about five hundred dunams and every time they harm a different plot.

On February 16, 2010, the police informed Yesh Din it had closed the investigation file due to “offender unknown.”
Silence is Golden