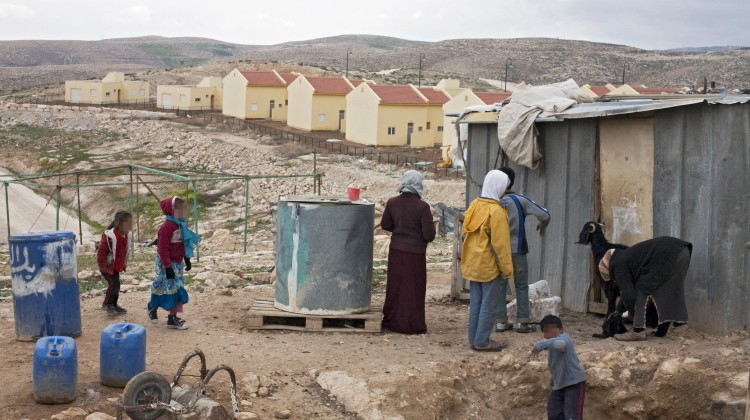 My tribe lives in Um al-Kheir. We live in tents and shacks. The civil administration keeps trying to expel us, claiming that we are on state land although the residents, who are originally refugees from 1948, bought this land at the end of the 1950s-early 1960s from residents of Yatta. During the early 1980s, the settlement Carmel was built right beside us on part of Um al-Kheir’s land. At the end of 2008, the settlement expanded to the south, and in 2009, settlers from Carmel – with the approval of the civil administration – broke ground and paved a road on the southern side towards the east on land owned by Palestinians. The civil administration claims the road is on state land. The Palestinians hired a private lawyer who is dealing with the settlement’s expansion.

We suffer from problems and settlers’ physical violence nearly every week, because they try to prevent us from reaching our cultivated land, our grazing land and water. Settlers, especially from the new neighborhood often chase away the herders from the fields, shoot in the air and are assisted by the army and the police in spreading fear. Since the settlers paved the road and the Palestinian’s popular resistance, the settlers have entered a new phase, in which they try to damage our crops and the plots we cultivate, especially on land marked as state land. My family and I have a plot of 67 dunam registered in my father’s name, and which is not defined state land. The plot is about 200 meters south-east of my house, about 250 meters east of the settlement. We plant seasonal crops there, and now we are growing tomatoes, okra, peppers, eggplants and other vegetables.

On July 28, 2010 at 3:30 pm I was at home. Suddenly I heard from people in the village that a bulldozer was starting work to pave a road right by my plot, just outside the plot where I grow my crops. We claim that this land is ours, but the civil administration insists this is state land. When the residents of the village saw the bulldozer had started to work, there was an uproar and most of the people from the village went over to the bulldozer and drive it away. The settlers’ system is to first send a bulldozer or a tractor, usually owned by Palestinians from the area, without any settlers present. When the people from our village went up to the area, the bulldozer driver got scared and drove away. The village residents know that settlers are not allowed to pave a road in this area, even on state land. We were made aware of this during the previous incident, which was several months ago. The settlers had tried starting such work and we objected, and the civil administration officers who arrived halted the settlers’ work and explained to us that both the settlers and we are prohibited from performing such work there.

That day, July 28, 2010, before the village residents crowded around the bulldozer, it had managed to clear a 50 meter path. We closed up the path it had cleared with large rocks. At some point, the settlement’s secretary, a settler called K appeared and photographed us blocking the road. He asked us what we were doing, and we replied that we were putting things back way they had been, because the settlers are not allowed to pave the road. Apparently, K alerted the army, because four army jeeps and the settlement civilian security coordinator [CSC] from Carmel, S arrived.

First, an Arabic speaking officer came over and asked us what we were doing. We explained that we were there because the settlers want to pave a road where they aren’t allowed to, and that we didn’t see anyone, we didn’t have any contact with any of the settlers (the officer thought we had thrown rocks), and that the bulldozer that had been working left. The officer understood and said, no problem, and left.

About a half an hour later, at around 4:30-5 pm, S, the CSC from Carmel arrived again with two soldiers and spoke to me, my brother S and other relatives who were there. The CSC wanted my brother to explain to the soldiers what happened. S insisted on speaking Arabic, and the CSC demanded he speak Hebrew. They argued, apparently to impress the soldiers. At a certain point, the CSC left. The soldiers asked the three men and the women to sit and they asked the men for their IDs. The soldiers checked our IDs over the radio. We kept telling the soldiers that we don’t speak Hebrew, and that they should bring someone who speaks Arabic. At one point, a soldier spoke to us in Arabic over the phone, and explained it was a closed military zone, although we were already in the village and not in the field. He promised to come the next day, but he didn’t. The soldiers said they hoped we wouldn’t return to the area that had been declared a closed military zone, returned our IDs and left. We returned to our homes, that night I slept outside.

At around 11 pm I woke up to the sound of a dog barking. The house was dark. I understood something was happening. I went indoors to put on my shoes and turned the light on, so they’d see people were waking up. I left my house because I understood something was happening on my plot. I ran towards the plot, and when I started running, I saw three people leaving the plot towards the settlement Carmel. I didn’t plan on pursuing them because I was scared they might be armed, but I wanted to see where they went. I saw them turn towards the new neighborhood that was built on the settlement’s south side, and they disappeared among the houses. I didn’t see which house they entered. This strengthens my suspicion that the three were settlers from the settlement of Carmel. I suspected they had come to destroy my cultivated plot but because it was dark, I meant to return in the morning to see whether they had done any damage. I went back to sleep and around 5 am on July 29, 2010, I went to my plot.

I saw that the settlers had destroyed about half of my crops, damaged my irrigation system, uprooted about 300 saplings that were two months old, and broke two almond trees. At around 6 am, I called the police and they promised to send a police car. At around 6:30 am, a police car arrived with two policemen and a policewoman. The policemen went into the village with me, and the policewoman stayed in the car. The officers began walking with me towards my plot where the damage was, but after we’d walked part of the way, they said they saw what had happened, didn’t take any photos and didn’t want to continue. They told me to file a complaint at the Kiryat Arba Police. I waited for about half an hour outside the police station. An officer let me in, and I waited for two hours for an investigator. The officers claimed I had to wait for an investigator who spoke Arabic. At 5:30 pm, an investigator who spoke Arabic arrived, I gave my testimony and filed a complaint.

On August 17, 2010 the police closed the investigation file due to “offender unknown”.
Silence is Golden