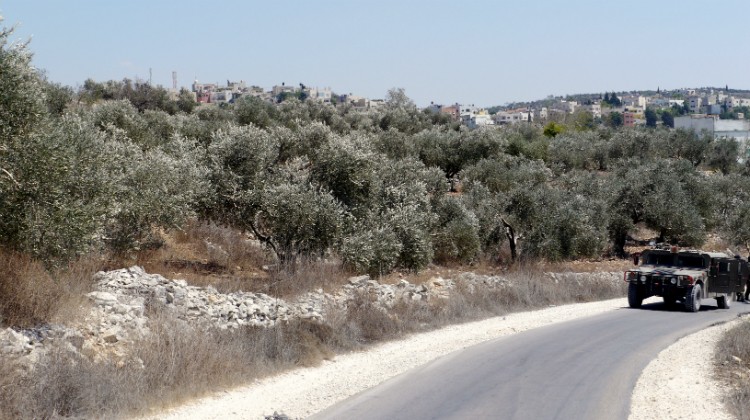 I work for a company that markets soft drinks, its office is in Kafr Odala, near my village. The company is called al-Madmouj. I’m their sales representative, and every day I travel to a different village to sell soft drinks as well as staples such as sugar and rice. I have a small Volkswagen commercial vehicle. In the morning, I drive to Odala, load the vehicle and then drive to the villages in the area. I leave home at around 8 am and return around 5-5:30 pm.

On that same day, July 1, the day of the incident, I was doing the Qalqiliyah-Jit- al-Funduq route. I finished work at about 5:30-6, I was on route 55 by the entrance to the settlement of Kedumim, driving in the direction of Jit. I was driving on the side across from the gas station. There were three settlers on the right, in the direction I was driving, and an army jeep across from them on the left side of the road, the side of the settlement. The settlers jumped in front of my car and stopped me. They forced me to stop. If I’d kept on driving, I’d have run them over. I thought maybe there was a search, because there was an army jeep across from them. I stopped my car and one of the settlers opened the door. Two of them grabbed me by the shirt and by my hair and dragged me out of the car. They looked like they were in their 20’s, no sidelocks or beards, they were wearing kippahs. They had light skin and hair. One was really strong. I saw a gun on one of them, but he didn’t use it. I could recognize them if I saw them.

They dragged me from my car and the engine kept on running. And across, the soldiers sat in the army jeep. The settlers started hitting me, they pinned me down on the road and punched my face. Blood oozed from my mouth, they punched my head and started kicking my stomach. They grabbed my head and bashed it into the road. My entire face was bleeding. They ripped my shirt. The blows were from the waist up, I started to vomit blood. This went on for five-six minutes and then traffic started building up on the road, people didn’t leave their cars and didn’t move. The two soldiers from the jeep crossed the road towards me to get traffic moving again. When the settlers saw the soldiers crossing, they walked slowly towards the settlement Kedumim towards the gas station. The soldiers didn’t come over to me and left me lying on the road.

Several Palestinians I didn’t know got out of their cars and asked me whether I wanted them to call my family or someone from my village. I said, “there’s no need.” They washed my face and head and offered to drive me to the hospital. I didn’t want my family to worry. I got in my car, I buckled my seatbelt and started driving, but I felt that I couldn’t hold the steering wheel straight, I felt very groggy. Somehow, I managed to reach Odala by the office and I collapsed, and I can’t remember anything. I woke up in my house, lying on the floor. Afterwards I found out that the company workers took me home while I was unconscious.

When I regained consciousness at around 7:30 pm, there was nobody at home because there was a wedding in the village and everyone had gone. I started vomiting blood. One of our neighbors saw me and called a relative at the wedding. He told my father, and my parents came. I passed out again and when I awoke, I was in Rafidya Hospital in Nablus I think at 8:30 pm. I stayed at the hospital until the next day at 5, after having tests and receiving medication. I continued eating and then vomiting and feeling nauseous.

I took five days off work and lay down the entire time. I go to work and then rest the next day, or every two days because I don’t feel well.

That day, July 1, I was at a wedding at the village with my wife. A relative of mine came up to me and told me that my son had been beaten up by settlers and punched in the stomach. I immediately went home with my wife and we found our son on the floor, blood coming out of his mouth. I started talking to him, but he didn’t respond. I quickly picked him up and carried him to my truck, which was parked by the house. I didn’t wait for an ambulance because my son was unconscious, and I was in a hurry. I drove to Nablus to Rafidya Hospital, I drove through red lights because I was very, very concerned.

While testifying at the police station, the victim identified one of the attackers in a lineup in an album of photographs presented to him. Yet, the suspect was not investigated, and the police closed the investigation file due to “offender unknown.”
Following Yesh Din’s appeal of this decision in July 2010, the police reopened the investigation file. In September 2010, the case was again closed, because the police claimed that the army did not have any documentation of the incident and the suspect identified by the victim was not in the country on the date of the incident.