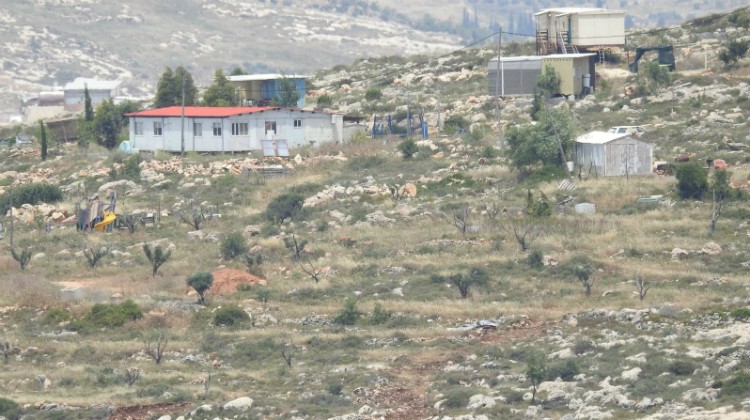 On Saturday morning, March 5, 2005, I went plowing. My plot is north-east of the village, about 600 meters from the road from Tapuah Junction leading to the village, and approximately one kilometer from the settlement Kfar Tapuah, which is on the mountain ridge across. I was working alone in my plot when at approximately 2 pm I found myself surrounded by about six young settlers. I think they were 17-22 years old, they weren’t wearing religious items and did not have any special identifying marks. If I saw them, I could identify them.

Two of them grabbed my hands and held them tightly behind my back. The third punched me in the eye. I could identify the first guy who hurt me because he was tall, broad and red-haired. I don’t recall the others as well, because while they were beating me they hid their faces with their hoods. They were unshaved, they had a stubble on their cheeks. One of them picked up a rock and smashed it to my head. My head was bleeding and my face filled with blood. After that, they pushed me off a terrace – approximately one meter high – and fled.

I called for help, and a herder I know from my village, named W.A was around and heard my cries for help. He helped me reach the gate where the guard stands at the entrance to the settlement Kfar Tapuah. The guard called the police, and just then a military jeep arrived and took me to Tapuah Junction. There a police officer checked my ID and issued a summons to Ariel Police for Sunday, March 6 at 10:00 am, to file a complaint.

At Tapuah Junction, I got into a military ambulance and received first aid. After some time, a Red Crescent ambulance arrived and it took me to Rafidya Hospital in Nablus around 4-5 pm, where I received medical treatment. At 7 pm I was released from hospital.

The medical treatment summary I received notes I suffered two head wounds, which they stitched – one above my temple with 3 stitches, and one above my forehead with 5 stitches. I had a hematoma and puffiness under my left eye, and a bruise on my upper left hand.

The next day, in the morning of Sunday March 6, 2005, the Ariel Police called and told me that my summons was delayed to Sunday the week later, March 13.

When I came to the police station, they told me to identify suspects on the police’s computer. They presented me with about six photos, but I didn’t identify any of the people in the photos. None of the photos were of the young men who attacked me. On March 15, they called and told me they caught a suspect and that I should come identify him. Again, I didn’t identify my attackers.

WA, 36, married and the father of 7 children, Yasuf

On Saturday March 5, 2005 I herded my sheep on my land between 1-2:30 pm approximately. I was waiting for my children to get home from school and take over guarding the sheep. I looked over to the path where I was expecting my children to come from, the direction of the hill with the antenna on it. A hill that is south-east of the settlement Kfar Tapuah. At the same time, MH was farming his land on the hill across from me. There was a valley between us. I was about one kilometer away.

Suddenly I heard shouting. I looked over to where the shouting was coming from and saw several people dressed in black, and I knew that MH was there too, because I saw him working there earlier. I don’t know how many people were there, I would guess five to eight people. They attacked MH. I was far away but I could understand that this group was attacking MH. I shouted very, very loudly, and the attackers fled. They ran off towards the settlement Kfar Tapuah. When I saw them running, I realized they were settlers. I ran to tell the army at the checkpoint at the entrance to Kfar Tapuah. Just then, a Palestinian bus arrived, I talked to the driver and asked him to tell the soldier on guard at the junction to alert the police.

F, my son, stayed with my sheep. I ran over to MH to help him. He was injured all over and bleeding and could barely stand up. I took MH, I helped him walk, and we walked past Kfar Tapuah. At that time, two army vehicles arrived, they were called over. I called to them to bring an ambulance. MH sat on the road until a military ambulance arrived and administered first aid. Ten or 15 minutes later, a military ambulance arrived and administered first aid. I called MH’s house and asked for his ID card, so he could be transferred to hospital.

I saw the settlers who attacked MH returning and going past Kfar Tapuah’s gate. The guard at the gate could probably identify some of them. The police arrived. I told the soldier I was talking to that the attackers fled to Kfar Tapuah and then later I heard him say to another soldier, his buddy, that one of the attackers is from Jerusalem. I led the police officers who arrived to the site of the attack, and they photographed the area with the rocks and blood. I recall that the officer was surprised that the settlers had walked 700 meters from the road to attack.

On February 28, 2006 the police informed Yesh Din that the investigation file was closed due to “lack of evidence”.
Review of the investigation file raised concerns regarding the quality of the investigation, including the concern that the photographs presented during the photograph identification line up did not include any of the relevant suspects. Yesh Din’s legal team appealed, asking the investigation be reopened and completed.
On September 19, 2007, two and a half years after the assault, the State Attorney’s Office rejected the appeal and established that despite the circumstantial evidence suggesting the involvement of some of the suspects in the incident, it did not provide sufficient evidence with the degree of certainty required for a criminal proceeding.