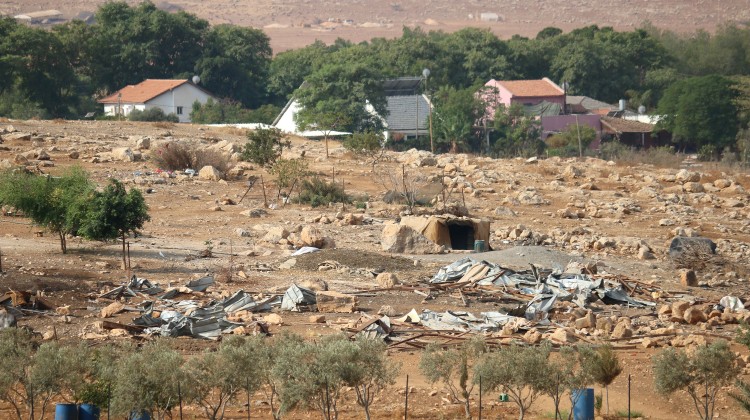 The Palestinian residents of the area, most of them are herders, suffer from attacks in general, and specifically attacks by settlement civilian security coordinators [CSCs], especially recently. The problems include preventing us from reaching our grazing land which are close to the settlements, driving herders away from water sources, and sometimes violence. [Some of the previous complaints pertaining to the Maskiyyot CSC’s violence were filed with the assistance of Yesh Din].

Most of the year, my family herds our flock close to route 90 which is ten km away from where we live, especially by the settlement Shadmot Mechola, and usually we herd there without any problems. Sometimes we get close to the settlement and then the CSC comes over or sends over the army and tells us to move 100 meters away from the settlement, and we can herd there.

Suddenly, a white civilian vehicle appeared from the direction of route 90 and took the dirt road leading to the area where we were herding. There were four people in the vehicle. At first, the vehicle passed my brother, who was 120 meters away from me. The vehicle stopped by him and the driver got out, I saw it was D, the CSC of the settlement Rotem. He talked to my brother for a few seconds, got back into the vehicle and then drove towards me. I was about ten meters away from the dirt road. The vehicle stopped and D the CSC stayed inside and motioned for me to come over. I did and when I got there he had left the vehicle. We stood by each other. He asked me in Hebrew, “Whose son are you?” I said – “I’m K’s son.” He knows my father from previous incidents. FD, my cousin, who was about twenty meters away saw what happened. The CSC asked about him – “Who is he?” I said, “He’s my uncle P’s son.” The CSC knows my uncle as well. He asked, “Where is [your uncle] P?” I replied, “He’s at home.”

And then, for no reason, D the CSC rammed his head into my head by my right eye. I got dizzy from the blow and nearly fell. I put my hand over where the blow was, and he started punching me. I remember him punching me by my eye, my chest and my face. As a result of those blows, I fell and lost consciousness.

I woke up in the hospital. By my bed I saw my father, and he told me that they’d called a Palestinian ambulance that took me to the hospital in Jenin. They took x-rays, no fractures were found, just bruises. I stayed there overnight for supervision and was given painkillers. On Saturday morning I was released. I still feel dizzy and my right hand hurts, I fell on it, so does my right eye.

When I got home from the hospital, my brother OD and my cousin FD told me what happened after I fell: D the CSC was frightened and quickly got into the vehicle and drove towards route 90. They chased him because they saw I was unconscious and called to him – “Come back and save him!” He replied, “Go back to him and pour some water over him.”

They walked to the army post that was 800 meters away to call for help. They found an Arabic speaking soldier, told him what had happened, and the soldiers sent an army vehicle to check on my condition. I guess the army called a Palestinian ambulance through the Israel DCO.

My brother called my father, and he arrived as well as the police. The police gave my father a summons to be investigated. The soldiers also called an Israeli ambulance that arrived, but in the end, I was taken to hospital by a Palestinian ambulance.

D the CSC is known in the area for harassing herders. A few years ago, he shot two cows owned by my uncle P, and I remember he also shot other peoples’ cows. Half a year ago, he beat my uncle S.

On the day of the incident, I left with my two cousins, MD and OD at 6 am to herd our cows in an area called Halat Tawileh, 2 km south of the settlement Shadmot. We usually herd our cows there, the land there belongs to people from Tubas and some belong to our family.

At around 12 or 12:30 pm I saw a white SUV that looked like the civil administration vehicles, closed in the back. I know that this car belongs to a man named D, who is the CSC of the settlement Rotem. I recognize him from previous incidents.  The vehicle drove up on the dirt path from route 60 driving west, towards where we were herding our cows. When the vehicle entered the area, the three of us were in different places, about 100 meters away from each other.

At first, the vehicle passed my cousin OD and drove towards my cousin MD. The driver started honking the horn, apparently, he wanted MD to come over to him. I saw MD walk over towards the vehicle, and when he got close, the driver – D the CSC got out of the car towards MD. There were three other people in the vehicle, I couldn’t see who they were. The CSC started talking to my cousin MD and suddenly I saw him banging his head into MD’s head and slapping him. As a result, MD fell to the ground.

The CSC got into the vehicle and drove over to me, and when he got close he yelled for me to come over. I think that at first, he didn’t see that MD fell to the ground, but when he reached me, I yelled that MD had fallen. He looked over to MD and when he realized that he was in trouble, he ran off with the vehicle towards route 90 instead of dealing with me.

I immediately went towards the road to look for help. The CSC was still on route 90 and told me to go back to MD and pour water over him. I said, “What are you talking about? Call the police”. I went to the army post, which is on the eastern side of route 90. The CSC saw me talking to the soldiers and spoke to someone on his phone. Then a vehicle arrived and picked up the three passengers from his car and drove south, I don’t know where, and he stayed behind. I don’t remember what type of car picked them up.

Thirty minutes later, the police arrived. D the CSC stayed there until the police arrived. The soldiers went to MD before the police came and they thought he’d wake up on his own, but he remained unconscious for a long time. The soldiers called an Israeli ambulance, and when it arrived it waited and the soldiers evacuated MD in the vehicle belonging to the CSC of the settlement Shadmot, which also arrived. The CSC’s vehicle met the ambulance and the soldiers began treating MD. After that they called a Palestinian ambulance that took MD to the hospital in Jenin.

The police officers didn’t speak to me, but the soldiers said they wanted to resolve the problem peacefully and asked us to calm things down. After MD was taken to the hospital in Jenin, we went back to herding. I want to note that this isn’t the first time that D the CSC has caused problems, in the past he beat other herders.

On the day of the incident, a vehicle I know is owned by D, the security officer of the settlement Rotem, arrived. There were also three passengers sitting in the back seat, people I don’t know. D the CSC came over to me from the direction of route 90. At first, I didn’t know he was coming to cause trouble, because there were cases when he came and didn’t do anything.

The CSC stopped by me, and I said, “Hello D”. He didn’t reply and got out the vehicle and asked me whose son I am. I said that I’m K’s son. He asked me what I was doing there, I said I was herding the flock, and why was he asking, was I not allowed to be there? He pointed to MD and asked me who he was, I said, he’s my brother, and he drove over and began honking at him.

He stopped by my brother, got out of the car and I could see him talking to him. Suddenly I saw he headed MD forcefully and slapped him. I ran over to him and shouted at him in Arabic why was he hitting my brother. MD fell to the ground and the CSC got into the car and drove off. I tried to wake up MD, who was unconscious, but he didn’t wake up. I shouted at the CSC to come back, but he kept driving towards my cousin FD. FD yelled that MD was hurt, and when the CSC realized things had gotten out of hand, he dove away.

I asked him why he was leaving, and he said that I should pout water over MD so he would wake up. I said we wanted to go get help from the soldiers, but he said there was no need, that MD would wake up on his own.

D the CSC left the area towards route 90 and parked his car facing in our direction, so he could see what was happening. At first, we walked to the road to call for help, but we didn’t manage to stop any of the cars. Then we ran over to the army post across from the settlement Shadmot. Someone came out of the army post and sent over a solider who spoke Arabic. We told him what happened, and he told us to go back to the site of the incident and he’d send soldiers over. On our way back, we saw a Toyota vehicle driving towards MD. They put him in the back and the car drove towards a military ambulance that the soldiers had called. At that point, police officers arrived. The soldiers called a Palestinian ambulance, which took MD to the hospital in Jenin.

On November 26, 2012 the police informed Yesh Din that it had closed the investigation file due to “lack of evidence”.
In addition to the police complaint, Yesh Din addressed the Legal Advisor to the West Bank Area regarding the conduct of D the CSC. On January 14, 2014 the Legal Advisor’s office replied that the investigation file did not include sufficient evidence to substantiate administrative measures against the CSC, but “the brigade commander reminded the CSC of the powers granted to him and of the conduct expected of him as a CSC appointed by the IDF.”