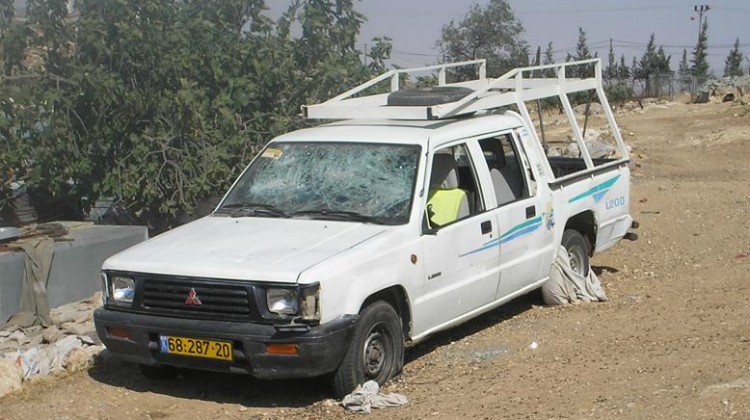 Our family lives in a place called Khirbet Lasefar. The settlement Beit Yatir was built right next to it. East of my family’s estate is a pre-military academy. There are three tall antennae in the pre-military academy’s yard. We live in several compounds that are close to each other, and the settlement fence is right by the compounds. Each family compound has a separate entrance. All the residents are M’s sons, grandchildren, great-grandchildren, he has 15 sons.

Because the family’s compound is an “enclave” beyond the separation wall (meaning, allegedly on the Israeli side of the wall) we are forced to get permits from the civil administration every three months for living in our homes. Every time we leave or enter our family’s compound, we have to pass Yatir checkpoint. The family has always suffered from the neighboring settlers. There’s a problem accessing grazing land, they throw rocks at the compound, and we have problems cultivating the land that belongs to us.

The settlement’s security unit adds to the abuse. They come to our compound at night, light up the area, point flashlights into the houses and tents and cause panic. The settlement civilian security coordinator is ZS. The many complaints we’ve filed over the years have not led to any results.

On Monday, May 17, 2010 I awoke to the sound of peoples’ voices and shouting, people who entered our compound. At first, I didn’t understand what happened, but then I heard voices outside of the tent where I was sleeping, car windows breaking, and cars being attacked. I left the tent and saw about 15 people walking around our compound, they were near two cars and a tractor. I saw the settlers divided into groups and each group damaged a different car. Another group was busy destroying our hospitality tent. Because the attackers were talking to each other in Hebrew, I understood they were settlers. At first, I tried to get closer to the site of the incident to prevent them from doing further harm, but then one of the attackers lifted a kind of ax at me, which prevented me from moving because I was afraid that he would hurt me.

The entire group was masked. Any time one of us left our home, the settlers attacked us with rocks. The settlers divided themselves so they would be able to attack the entire compound. They threw rocks at the house where my father, who is 89 was asleep but the rocks didn’t hurt him. Some of the settlers tried to harm the tractor by pouring salt or sugar in the fuel tank. They also broke the tractor’s battery. They broke two windshields and also threw rocks at the goats, and one goat died as a result.

The attack continued for about half an hour until the settlers decided to leave. When they left, I followed them and saw them enter the gate to the settlement and I saw ZS, the settlement civilian security coordinator standing by the gate and closing it after the last settler entered the settlement. During the attack, someone had turned off the lights by the settlement fence so it would be dark while they did their damage.

During the incident, my relatives and I called the police. The police arrived at around 3 am, they investigated us and photographed part of the damage. They demanded that we come to the Kiryat Arba Police station the next day to complete the complaint. After that, we saw the policemen enter the settlement, but we don’t know what happened there. The next day, part of the family went to the police to file a complaint. After that, police officers came to our compound and photographed and took fingerprints again. I saw them wearing gloves while they did the forensic testing.

Identifying the settlers – they were masked so it would be hard to identify them, but I think they students from the pre-military academy by the fence. The day after the attack, while the police was at our compound, they stood by the fence and started laughing when we gave our testimonies.

On March 20, 2011 the police closed the investigation file due to “lack of criminal culpability”.
Silence is Golden