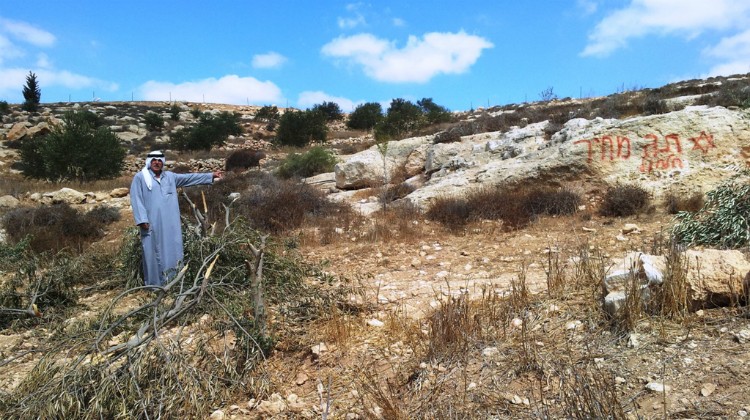 I own a 45 dunam plot of land south of the town of a-Dhahiriyah, 1.5 km north of the outpost Eshtemoa. I have an olive grove that is 12 years old on my land. Usually we produce 15 cans of oil, 15 liters per can.

Right after the outpost Eshtemoa was built in 2000-2001, problems started with the settlers: preventing access, harassing herders, attempts to take over land and damage to property [a previous complaint was filed with the assistance of Yesh Din].

Two days before the incident, on September 27, 2011 I went to my olive grove to check on it to prepare for the harvest. I usually go to my plot every two or three days. I didn’t see anything unusual there. On Wednesday September 29, 2011 at 8-9 am, AS called me, he’s a herder from the village, and he said he was herding in the area and saw trees that had been cut down on my plot.

My son who was at home called the police, he and I and other people from the village went over to the plot. When we arrived, we saw cut down trees, broken branches. Half an hour after we arrived, four or five military jeeps arrived with soldiers and trackers. The trackers began checking footprints and we heard them tell the soldiers there were four or five people who did the damage. I saw them check the footprints towards the outpost Eshtemoa. A little while later, three police cars arrived. They became more interested once they noticed a slogan painted in Hebrew, I understood it was revenge for [an incident by] Halhul.

The soldiers and we counted 45 trees that had been cut down. The police also counted [trees] and took photos of the damage. The police officers and the soldiers stayed in the grove for about an hour and told me to file a police complaint in Kiryat Arba.

The following day when I went to my land, I saw ten additional trees cut down in a higher spot, which we hadn’t counted the day before. Later that day, AS, a taxi driver who drives on the road by the grove every day told me that on the day of the incident he saw settlers walking up to the road from the direction of my plot. I told the police about that.

Four days later, the police called and asked me for documents proving ownership of the land. I submitted them to an officer named Y, whom I arranged to meet at the intersection on route 60. He came to my plot again with me and photographed the damage and gave me a receipt for the complaint. That same day, a Druze DCO officer came to my plot and saw the damage and told me to call him if there was any more damage.

On July 10, 2012 the police informed Yesh Din that it had closed the investigation file due to “offender unknown”.
Silence is Golden