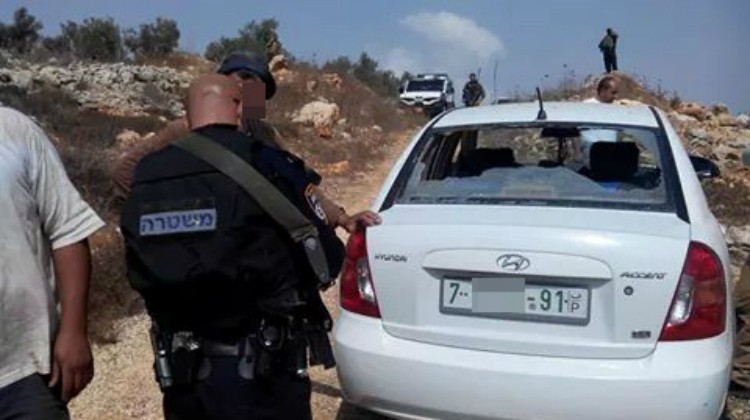 AA, 31, married and the mother of three, Yasuf

My brother and his brothers have tended the plot since the 1960’s, there are about 30 olive trees planted there. It’s difficult to cultivate the plot because we suffer from ongoing violence from settlers. They try to drive us away from the plot, threatening us with their weapons and throwing rocks and cutting and burning down the trees.

Some of the residents of our village own land that is in the settlement’s special security zone [SSZ]. The settlers set up mobile homes on the village’s land among the ancient trees that are in the SSZ. For years, a High Court of Justice petition has been in proceedings [with the assistance of Yesh Din]. In the past, the High Court instructed Israeli authorities to remove a barrier built of rocks that prevented accessing the SSZ on the agricultural path. When the second intifada erupted, the Israelis set up a gate there to prevent free access to the plots.

On Thursday October 9, 2014 at 7 am my husband and I went to the plot to harvest olives. Working on this plot does not require coordination. We began harvesting and worked all day until 4 pm. When we prepared to leave, we saw two young settler men in white shirts but with their faces uncovered yelling at us in Hebrew, which I don’t speak. Along with yelling, they also threw rocks at us. It was almost evening and we had been planning to pack up and go home, so we left the plot.

The next day, Friday, we didn’t go to work. On Saturday October 11, 2014 we left home at 7:30 am and harvested until 10:00 am with no interruptions. When I began filling the sacks with olives, seven settlers surprised me by coming up – five meters from where I was working. They were all dressed in white and they all were masked. They held metal rods and rocks. I started running towards our car. My husband hadn’t noticed the settlers yet because he had been standing with his back to me. It was clear that the settlers wanted to surprise us.

The settlers began chasing us and throwing rocks. Once my husband noticed what was happening, he also ran towards the car, which was parked about 25 meters away. I ran through the thorns and the rocks and every few minutes I tripped and got up again and they kept throwing rocks at me. My husband and I nearly managed to get to the car, but we couldn’t get inside because the settlers grabbed me. One of the settlers who got to me attacked me and hit my left leg with a rod he was holding. The rest of the settlers began throwing lots of rocks at our car and managed to shatter the back window.

Neighbors in the nearby plots who heard us shouting and the settlers shouting in Hebrew came to our assistance. Once the settlers noticed help was on the way, they ran away, and a chase began. One of the neighbors claimed that one of the settlers was armed and fired a shot in the air. I didn’t see that or hear any shots.

The army and the police and a Red Crescent ambulance arrived within 20 minutes. The ambulance paramedics gave me first aid and then took me to the medical center in Salfit, there they took blood tests and x-rayed my leg. The x-rays showed no fractures but a lot of bruises all over my body. My leg is very swollen and it’s very hard for me to put my weight on it. The police took my testimony at the site of the incident but didn’t leave any document. The police investigator also photographed the car. We’re in a situation where accessing our plot means risking our lives!

On March 30, 2015 the Central District Attorney’s Office reached a plea bargain with two attackers. As part of the plea bargain, the offense concerning the assault of the Palestinian harvesters was removed from the indictment. The defendants confessed to the amended indictment and were convicted of violating a legal order, unlawful entry into a closed military zone, rioting, interfering with the work of an officer and assault of a public officer.
Defendant 1 was sentenced to 12 months in prison and also received the probation sentence from a previous conviction to be served in parallel to the prison sentence in this case. Defendant 2 was sentenced to five months in prison.