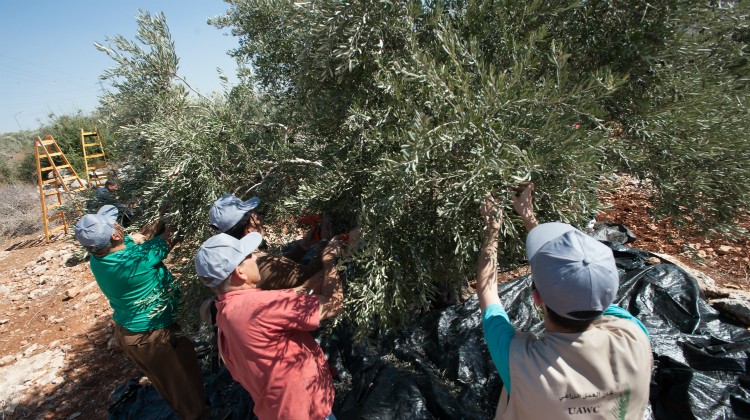 My brothers and I inherited 105 dunams of land on the outskirts of Deir Istiya from our father, who inherited it from his father. We were six brothers, one passed away, two don’t live in Palestine, and two are younger than me and live here. So I farm the land owned by my entire family. We have deeds attesting to our ownership.

The land is south-west of Deir Istiya, north-east of the settlement of Revava. The road, which crosses Wadi Qana and connects Kifl Haris and Kedumim, severs our land into west and east, and both parts have olive trees on them. The western part, which is 45% of our land, is by the settlement Revava. There are about 200 trees on the western side, and about 350 on the eastern side. Our land west of the road is divided by the road that leads to Revava. We have approximately 15 dunams on the southern part, where the army has prevented us from entering for the past four years, claiming that this is the settlement’s security zone. We filed a complaint to the Palestinian DCO, but nothing was done about this. Peace organizations from Israel helped us in the past harvesting and plowing the land north of the road leading to Revava. This is the land where the incident took place.

When the infrastructure for the settlement of Revava was being established in 1986, I saw a tractor preparing the land. There were also military and civilian jeeps. I took two stones and wrote those license plate numbers down on the stones. My father and I went to the Ariel Police and filed a complaint about this. The Ariel Police halted the work there. But it resumed in 1991. That’s when the road leading up to Revava was built on our land. While initially it wasn’t paved with asphalt because the police intervened, a few years later, when the intifada broke out in 2000, work started again, and the road was paved with asphalt. When we came and watched the work taking place on our land, the police came and gave us [traffic] tickets. Only us. Not the settlers’ vehicles, who also came.

On Sunday, March 5, 2006 at 7:30 am, I went to work on my land with two people I hired to help, MD who owned a horse and plow, and AD. We began plowing the land west of the road that crosses Wadi Qana, and north of the road leading up to the settlement Revava. We worked for about an hour, and then the [settlement] security guard came up in his security vehicle. He wore a security uniform and from inside the car he told us, “You aren’t allowed to be here, you have to go 500 meters back.” Five hundred meters is beyond the borders of our land. We didn’t listen to him and kept on plowing. He drove off and returned 20 minutes later. When we saw him returning, we walked 30 meters back. Then a military jeep appeared with an officer and three soldiers. I don’t have any identifying details. Three of them got out of the jeep. They asked what happened, and I told them what happened with the security person. I asked the officer to check whether anyone has a formal document regarding my land, as I have formal documents (deeds) proving this is my land.

The officer spent a quarter of an hour on the phone making inquiries. When he returned, he asked: “Where do you want to work?” I said, “The area he made us leave.” I walked to the spot with him and showed him the borders of my land. The officer said, “If anyone comes to you, say the army allowed you to farm the land.” He also added: “You are allowed to work wherever you want to on your land.” After the army left, we continued plowing our land.

An hour later, a different [settlement] guard came – I don’t know his name, but I recognized him from a previous incident two months ago. He has a beard that is not long, light skin, he’s about 1.80 meters, no kippah and a full build. This guard asked us for our IDs. We showed them to him. I told him that the army had been over to check and permitted us to work here. The guard said, “No problem, go on with your work.” We continued until 2:40 pm, and then a young man 18 or 20 years-old, about 1.70 meters tall, thin, wearing a kippah, black hair, maybe Yemenite, the moment he saw us began asking: “What are you doing? Whose land is this? Do you have permits?” I told him that the army came earlier and allowed us to work. He asked when we planned to leave, and we said that at 3 pm we would be going home. At 3pm we went back to Deir Istiya.

The following morning, March 6, 2006 at 7:30 am the three of us walked to my land again, to continue plowing where we stopped yesterday. At 8:30 I saw a small black vehicle with two people in it. The vehicle stopped 15 meters away. It was on the settlement’s perimeter road. I noticed that one of the guys took off his coat and threw it in the car. I didn’t pay them special attention, but within 30 seconds they were right by us. Both of them were armed – I think with M-16s, and started yelling: “Get lost, this isn’t your land!” They pointed their weapons at us. One of the men was holding a rope in his other hand. At that moment I remembered very fearfully what happened to an elderly man from our village who was captured by settlers and tied to an olive tree while they torched several trees nearby as he watched.

I thought to myself that while the officer said that if we were threatened to try and ignore and not get into a confrontation, their weapons and shouting scared us. While I was walking, I turned back and said to one of them: “Let me gather our things.” But the man said, “Get out of here quickly, I don’t care what the army told you. Go to Deir Istiya. You aren’t allowed to be here.”

Description of the men: both wore kippahs. Both had beards. One had a bigger beard. Both wore glasses. Both were over 1.80 meters tall. The man with the longer beard had sidelocks and fringes and he was fuller than the other man. The man who yelled, spoke and threatened was the man without the fringes. He held the rope with his other hand.

On Sunday March 5, 2006 at 7:30 am I went to AA’s land, he had hired me to work on his land with my mare and plow. We went to plow his land and then a security guard came and asked us to move 500 meters back, which would be beyond AA’s land, I didn’t do as he said. I continued plowing. I told myself he’d leave and wouldn’t be back to interfere. The guard did return, so we moved 30 meters back. The army arrived and AA spoke to them, and they told us to continue working and to tell anyone who asks that we are here with the army’s permission. After the soldier left, a different guard arrived, asked us for our IDs, checked them and said there was no problem and that we should continue working. At 2:30 pm a young man arrived, asked us what we were doing there, and did we have permits. We said we did, we said we’d work until 3 pm. That’s what we did. We went home at 3 pm.

The following day, Monday, we returned to continue plowing. We worked for about an hour until 8:30 and then two armed settlers arrived. One of them had a rope. They pointed their weapons at us and chased us off AA’s land. We walked far away from the perimeter road, to the land farthest away and worked there until 3 pm.

On February 12, 2007 the police informed Yesh Din the investigation file was closed due to “offender unknown”.
Silence is Golden