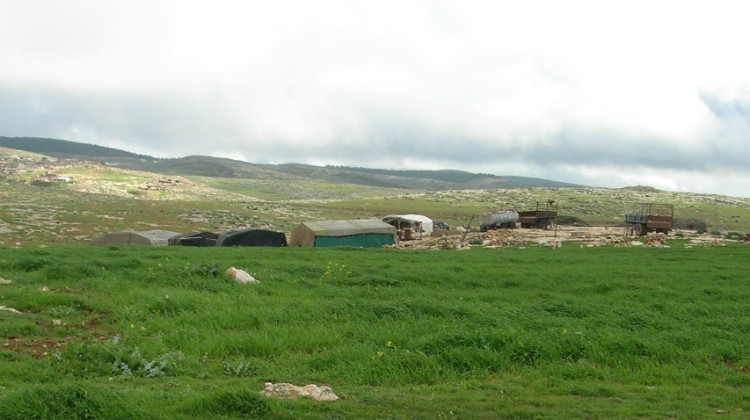 My home is a tent located between the settlement Susiya and a-Samu’. The wheat field is just by my tent and the assault was at the edge of the field.

On Saturday February 17, 2007, I was at home. At 3 pm, two settler herders came, probably from the settlement Susiya, with a herd of 200-250 sheep and stood on the hill 50 meters from my tent, I can’t identify them. Three other settlers stood 200 meters away from the tent. The two [herders] took their sheep into my field close to the tent, the wheat field.

I went to them and said in Arabic that this is my land and my wheat, which I make my bread from. This is the first time I’d seen them. The settler said: “Shut up!” I tried to move the sheep away from my field. The settler who told me to shut up grabbed my shirt. He said to the second settler in Hebrew: “Come help me”.

The second guy came over with a rock the size of the palm of my hand, it probably weighed about half a kg, and hit me on the mouth. He broke two of my teeth. My nose and mouth were bleeding. I fell to the ground and then my daughter-in-law came running to me. When the settlers saw the blood and that I had fallen, they took the sheep and ran away.

Half an hour later, my neighbors from a-Samu’ arrived. I told them to call the Kiryat Arba Police. After half an hour, two policemen and six army jeeps came with a military ambulance. They couldn’t reach my home with their vehicles because of the rain, so they parked them and walked. When they arrived, I was still lying in the field.

They asked me, “Where did they attack you?”, I said: “Here.” They asked, “Are the field and the tent yours?” I said: “They are.” They photographed me, the field, the tent. They asked, “Who was here?” I replied: “My daughter-in-law and I.”

One of the policemen gave me a summons to file a complaint at the Kiryat Arba Police. The ambulance medics dressed my wounds in the field. They took me to Zif Junction and from there by a Palestinian ambulance took me to Abu al Khassan al Kassem Hospital in Yatta, and from there I was sent to al-Ahali Hospital in Hebron because I needed an x-ray. Al-Ahali is a private hospital, it’s the only place to get x-rays. I got x-rayed and was transferred to Alia, which is a government hospital. I reached Alia at 9 pm.

I went home that very same night. The next day I took the medical records that were translated into English at the hospital and went to the police with two of my children. The policeman asked me what happened. He showed me two albums with about thirty photographs and asked me whether I could identify my assaulters. I didn’t identify any of them.

They gave me a receipt for filing a complaint and said they would search for the attackers over the next two months. They said that if they didn’t call me within two months that I should call them, and they’d tell me what happened to my complaint.

On Saturday February 17, 2007 at 3 pm I was by my home, about 25 meters away from my father-in-law’s home. I saw two settler herders enter our field with their flock. I can’t identify them. I saw three other settlers standing farther away, one was masked. They weren’t armed. My father-in-law walked over to them. One of them grabbed him, and the other hit him in the face. He fell down, and I ran over to him. When I got to him, his nostrils were bleeding. The settlers took their sheep and left.

I shouted and so six neighbors came and called the police. The police and the army arrived a half an hour later. They photographed my father-in-law, bandaged him, took him and drove away. I went home.

On March 10, 2008, over a year after the attack, the police informed Yesh Din that the investigation file was closed due to “insufficient evidence”.
Silence is Golden